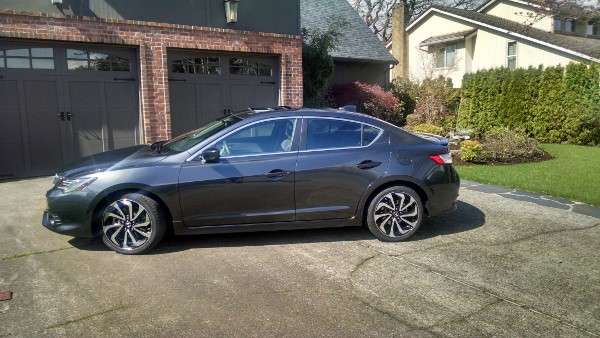 2016 Acura ILX A-SPEC: Serious hard-edged-handling-performance has a refined side

For 2016 Acura took the under-appreciated ILX and gave it a much needed injection of hard-edged-handling and TLX i-4 derived engine and transmission. Has Acura gone too far with ILX street performance?
Advertisement

We’ll begin this article with a bit of praise for Acura design and engineering. The short story is this: Acura’s made all the right moves with the significant refresh of ILX. The body design captures the imagination while inspiring visions of tight-sweeping uphill turns and high speed straightaways; ILX looks fast while sitting in park! The color pallet and wheel designs stand with the best in the segment, not too ostentatious, yet sport-stylish none the less.

Short overhang, low to the ground tendency with just enough Acura design cue to keep ILX in good company; on first view, we like what we see. As Mike Accavitti and company proudly states; “there’s nothing else quite like 2016 Acura ILX on the market today,” we agree, and A-SPEC punctuates Acura’s refreshed commitment to attainable sports-sedan performance.

On opening the driver’s side door, one recognizes a nicely balanced interior of Acura understated quality. Our 2016 Acura ILX is the top of the line A-SPEC. We discover a race inspired interior, breathable fabric, hand-stitched-looking high bolstered 8 way adjustable driver’s seat, perforated metal brake and gas pedal, red-lit dash gauges and just enough burnished metal to keep the interior look on the “racer’s edge”; it works!

Gear shifting in the case of ILX is accomplished via a 5 position center console stick(P,R,N,D and sport.) For 2016, power is transferred to the road via a direct injected 201 horsepower 2.4 liter 16-valve DOHC 1-VTEC gasoline 4 cyl. engine, and paddle shiftable dual clutched- automated 8 speed transmission with torque converter and limited slip differential.

Instantaneous shift mesh and torque transfer, we found this transmission to work flawlessly

ILX is a Disneyland “E” ticket ride for adults looking from a daily dose of adrenaline, while retaining the ‘sense and sensibility of a well-finished compact performance sedan; Acura style...

Acura assures us that 2016 ILX holds the highest power to weight ratio in its class; we’ve driven it and we believe Acura; ILX performs!

201 horsepower, 181 ft-lb torque right where you need it, in the mid-range

Torque News appreciates the new found horsepower and torque experienced through ILX. The overall ride quality is exceptional for this Honda Civic sized Acura. When driven in a civilized manner, the ILX engine, transmission and suspension work in unison to produce a ride of relative comfort while averaging MPG 25 city/36 hwy; and yet when called for, Acura ILX steps up to double as a well tuned corner burner of extreme Flatitude ™ .

With all respect due to Acura engineering and a bit of caution to Torque News readers: Those would be buyers with a pre-existing back, neck or hip problem may wish to take a closer look at Acura TLX or RLX; ILX runs on the stiff side of the down- force.

2016 Acura ILX in A-SPEC trim presents enough torque to keep you in Chiropractic adjustment with the drop of an F-Bomb and a flip of the stick to the “S” position. Add to the equation relatively stiff, suportive seating, suspension and low profile sidewall performance rated tires, one may wish to spend a week or two in the Gym prior to launching A-SPECK through some “S” turns; you’ll feel the ‘G” forces!

looking to ILX specifications: We find a notation for electronic noise cancellation(engine) listed as standard equipment. Also, a sound absorbing windshield and specially designed tire rims to reduce noise generated through the rim. Having driven the 2015 version of ILX, we do note a bit less interior noise, but not much!

Although body component and mirror generated wind noise has been reduced to a whisper, the aggressive, low profile 18 inch speed-rated tires and rims are so sensitive to road surface change, that the stereo system was rendered useless while driving down Oregon Interstate 5. Also, do to the stiff side-wall property of the tires, excessive road vibration was generated through the steering column and control pedals. Granted, Interstate 5 is beat! But that was our long-term-drive introduction to ILX.

Torque News has pushed 2016 Acura ILX A-SPEC way beyond the track limits of most production cars; it revealed no signs of breaking, tracked flat and true with little to no sign of over or under steer. Although ILX is a true front wheel drive vehicle, most wouldn't know, by driving it.

Acura is master at producing cars with split personalities

We’ve written much as to the performance sans premium attributes of 2015 TLX; in walks ILX, a bit more purpose built toward the compact performance side of the force; it will put your head back in the seat with conviction!

A final word or two

When measuring the broad and multiple faceted automotive attributes of 2016 Acura ILX, we discover a “portal” premium level compact sports-sedan worthy of serious purchase or lease consideration. ILX is truly “ageless" as to its broad demographic appeal; and while not the “perfect” choice for everyone’s “daily driver,” it does offer an uncompromising, financially attainable performance sedan platform for the weekend warrior; or the driver that simply yearns for a little entertainment while commuting.

In other words: 2016 Acura ILX A-SPEC features serious hard-edged-handling performance has a refined side; something that Acura does so well.

SteveC wrote on March 26, 2015 - 8:08pm Permalink
I would imagine that the ILX version with 17" wheels would not have as harsh a ride as the A-Spec with it's 18"s. If there's not much sacrifice in handling then that's probably the one I would buy.
Parks McCants wrote on March 27, 2015 - 7:05pm Permalink
Welcome SteveC. Yes, we drove all trim variants in Calistoga and found while the A-SPEC was a bit "stickier" in the turns, the premium model with ventilated leather seats and 17 inch rims was perhaps a bit more civilized. That's the one that I would purchase as an every-day driver. Thanks for dropping in...