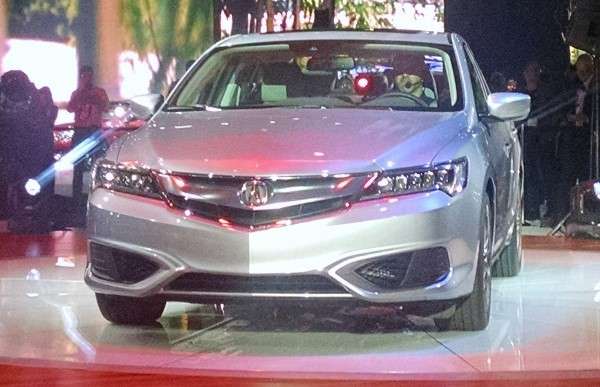 We like a good story 'spin' as much as the next guy. Acura’s second to none in building pent up consumer anticipation when it comes to the release of a new car or SUV. Will TLX performance live up to the Hype? We find out this week.
Advertisement

American Honda Motors, Acura Division is on a roll. MDX SUV leads North America in premium SUV 3 row sales, with RDX rolling closely behind. 2015 TLX has been a resounding success and despite an initial teething pain or two, is shaping up to be Acura's most exciting car in decades. Acura engineering and design is knocking on the door of long established front runners BMW and Lexus in the premium sports sedan class with a car that’s arguably the best value found today in a metric performance sedan.

This week we’ll drive Acura’s "next big thing," and anticipate a surprise or two waiting behind door # 1. You see, our friends at Acura have been rather tight lipped as to things to come for 2016 ILX. “ Catch it if you can” is Acura’s slogan for ILX, a Civic sized portal executive premium sedan that to date is Acura’s second best selling sedan on the bumper of TLX.

Acura’s #2 has been on the market since 2012. We wouldn't expect a total redesign this early in the game, and Acura isn't giving us one. But, if the “significant refresh” of Honda division’s 2015 CR-V SUV is any sort of an indicator, 2016 TLX will excite!

Front row center at the Los Angeles Auto Show we learned a few things about 2016 ILX; all good! What we're going to end up with when the smoke clears is a pocket Acura sedan knocking at the front door of Audi 4 and BMW 3 Series; costing $ thousands less and out performing both.

When released to dealerships later in February, the priced at under $30,000 Acura ILX will possess the greatest power to weight ratio in it’s class, the world’s only dual clutch 8 speed with torque converter, and the highest technology active safety systems in the industry.