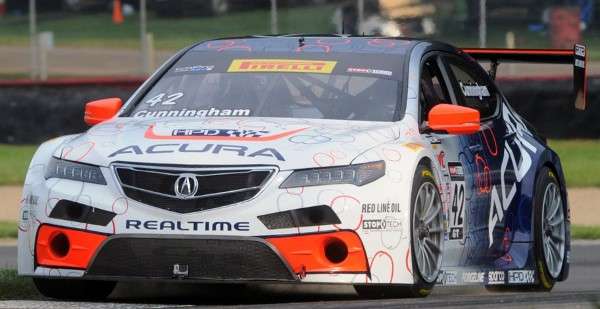 As reported by Torque News back in September, Acura and Peter Cunningham’s RealTime racing will add a second TLX competing in Pirelli World Challenge for 2015. Who’s the driver?
Advertisement

We spent some quality time speaking with team owner and driver Peter Cunningham of Acura, Real Time Racing at Sonoma Raceway back in August. This was the day after Peter had been rear-ended at the start of Saturday’s Pirelli World Challenge. Peter was amazingly composed for a 51 year old owner and race car driver that had been ran over by a Bentley Super 8 at 55 mph just hours earlier.

Sitting around the breakfast table at Honda’s racing camp, Peter eluded(just a bit) as to what the future held in store for Acura and RealTime Racing. While his team driver would be picked in the near future by Acura Motorsports and a second car would be placed on the race track, at that time the person and the pending schedule for Acura TLX and RealTime Racing was an unknown.

We had come to Sonoma to watch one of the winning-est drivers in SCCA sanctioned racing history; in a car that remained in the development testing stage long into the 2014 Pirelli World Challenge race season. Fried wiring harness, and now ‘rear-ended’ by a Bentley Super 8 at the starting line, damaged way beyond track side repair, 2015 Acura TLX in its modified glory would be out for the remainder of the season.

Peter shared with us at table side that TLX while similar in characteristics to your 2015 TLX SH-AWD V6, is in fact a not so distant cousin to an Indy series spec race sled. It does hold in common the engine block, sub frame and body shape, that’s about it. And is the only mechanical all wheel drive car on the track.

According to Peter, TLX IS also the heaviest car on the track. Watching Peter maneuver TLX in the rain, I’m not sure that that’s a negative. This car’s sticky and tracks like a slot car on rails. According to Peter 2015 TLX is a great car, mechanically sound and continues to gain lap speed in track trials. It should be a winner in 2015.

Looking to the drivers

At 51 Peter’s not the oldest driver competing in Pirelli World Challenge. He’s as sharp as a tack and moves like a man a decade younger. For the 2015 season Peter will be joined by Honda Civic Si driver Ryan Eversley. At 31, Ryan’s been racing around HPD for 5 years and is excited as to his opportunity driving for Acura, RealTime Racing.

looking to the record: Ryan’s made the podium several times driving for Compass360 Racing in the Continental Tire Touring Car Championship and is thrilled to be moving up to the majors with Acura and RealTime Racing.

We look forward to watching Peter and Ryan tag-team the Bentley team at “Circuit of The Americas,” Austin ,TX, March 06, 2015’s Pirelli World Challenge round 1. I’m sure it will be one heck of a show.