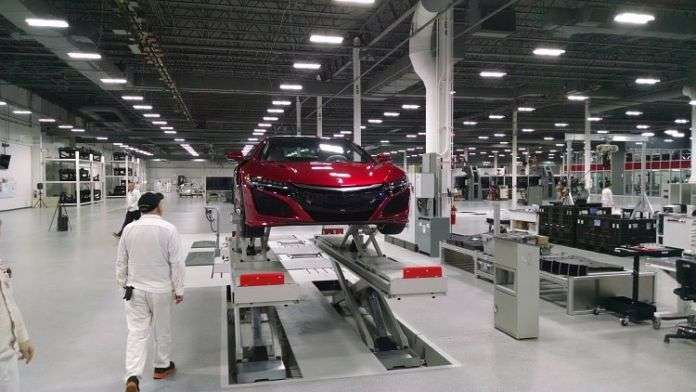 2 Reasons to visit Acura at the Portland International Auto Show

As workers hurriedly assemble the biggest Car and Truck Show in Oregon, I came upon two Acura models that are generally reserved for special order in much of the U.S..There they sat, in all their sport-hybrid glory.
Advertisement

This week Torque News walked the Press Days floor of the Portland International Auto Show. Held in the main hall of the Oregon Convention Center. One, if not the largest new car and truck shows in the Pacific Northwest is bigger than anticipated; featuring 600 domestic, import and exotic cars from around the globe. Here in force is American Honda, and Acura Division; with their entire lineup. Impressive!

Walking the Honda display I note the fabled Civic Type-R Hatchback Touring, a car that we rarely find in stock while touring Honda Dealerships across the nation. Dropping into the driver’s seat, I’m reminded of my “week in the seat,” and our epic journey with Civic Type-R to the Avenue of the Giants.

Acura’s embracing Precision Performance,” you can see it throughout the lineup

Acura’s design directive is a bit edgy, understated as to opulent bling, yet uniquely recognizable. Walking the show floor, I encounter a large, near full size sedan being prepared for show time. On first glance I’m captivated by its cutting edge digital taillight design, dual exhaust, and rear lower cowling; hard chine to organic 4-door side body design, and long sculpted hood cascading down to what Acura refers to as a diamond pentagon grill.

Gone is the controversial “Beak,” replaced with an aggressive black honeycomb mesh, black chrome, and a large 3D-like Acura moniker. Set on oversize wheels, low profile performance tires, shadowing an aggressive brake assembly, this is Acura’s refreshed 2018 RLX Sport Hybrid. Weeks earlier while attending the L.A. Auto Show, I tackled the streets and highways of California’s largest Metro behind the wheel of the near Autonomous RLX sport hybrid Advance. This is Acura’s premium executive sedan. You can experience RLX close up and personal in Portland.

2018 Acura NSX is the rarest of rare Acura offerings. Fewer than 600 NSX Sport Hybrids run the streets of North America; making America’s only supercar rare as hens teeth. Priced from $156,000, you don't generally find an NSX sitting in rotation at your friendly Acura dealership. For Acura Motorsport fans, NSX epitomizes the pinnacle of Precision Crafted Performance.

Although exquisetly complex under the wraps, what the NSX driver experiences behind the wheel of this extreme hybrid performance 2-seater is “one with the car.” To say that NSX is visually captivating is a bit of an understatement. I find myself crawling on hands and knees with camera in hand, around the static NSX display every time I encounter one. NSX is by far my most photographed Acura.

There will be no hands-on sitting in NSX at Portland. However, it’s well worth the price of admission to view NSX in person. You also find NISMO, MClaren, and other exotics to ponder. On the truck side of things, all the domestics and imports are out in force, with a premier vehicle or two dropping in from Jeep, Ram, and others. For Honda fans, Ridgeline is available for inspection in all it’s Black Edition glory. The Portland Auto Show runs through the weekend. Enjoy!