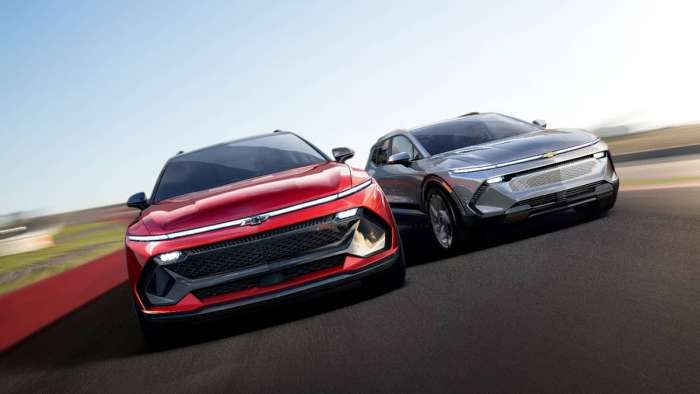 The 2024 Silverado EV might have been the one that caught the world's attention, but a second model was also teased during GM's CES press conference with the world getting their first glimpse at the Equinox EV
Advertisement

The Chevrolet Equinox EV is slated to be GM's attempt at reaching the mainstream market and is slated to start at $30,000 when it eventually enters production. That would be a noticeable change of direction when compared to GM's other Ultium powered models which have consistently targeted price points that are over the $100,000 barrier. Here's three things that you should know about the 2024 Equinox EV

A key change for the Equinox is the radical suit of clothes that it receives when configured as an EV. The current generation ICE-powered Equinox has styling that makes it about as exciting to look at as watching paint dry. The Equinox EV goes in a sportier direction and embraces some of the styling elements that have made recent European offerings popular with buyers.

The front fascia features an athletic-looking front bumper that comes with a faux lower grille and a wrap-around lightbar that flows from one end of the front end to the other. Lesser models tone down the athletic tones slightly but there's no denying that the Equinox looks much better than the Bolt EV. The wheels also come with a good amount of size, but with these images being high-definition renderings, the size will most likely change when it leaps off the paper into real life. The rear also comes with a light bar, but the piece here flows right into the center-mounted bowtie logo on the liftgate.

European DNA Extends Into The Cabin

The interior is also a noticeable step up over the ICE-powered Equinox and here too Chevrolet designers have taken some noticeable inspiration from European benchmarks. The cabin is awash in screens with a fully digital instrument cluster being complimented by a massive infotainment screen. GM chose to not reveal too many details about the interior but the renderings do indicate that the Equinox will be one of the recipients of GM's Super Cruise technology.

While it appears that the RS version gets the technology standard, lower trims will most likely get it as an optional extra. However, we'll have to wait until GM chooses to reveal more information on the Equinox EV to learn about some of the other technologies that the Equinox EV will bring to consumers.

Potent Performance For A Wider Net Of Customers

This early tease of the Equinox EV didn't include specifics on what kind of performance hardware is lurking under the Equinox EV's skin. However, it's known that the model will be a member of the Ultium family and will be built on the same skateboard-style platform that underpins its siblings. Unlike the Hummer EV, Cadillac Lyriq, and the Silverado EV, the Equinox will not be going for maximum performance and as a result, look for the electric motors to not be as spicy as those models.

The range will also follow suit but if the Equinox EV can still maintain a range between 250 and 300 miles before it needs a charge it would be right in the thick of it when it comes to competing with the Ford Mustang Mach-E, and the Tesla Model Y. As a bonus, the $30,000 base price would give it a value edge with buyers though look for dealer markups to eat into that somewhat.

We'll have to wait a while to hear more about the Equinox EV but look for the first production units to roll off the assembly line sometime in 2023.