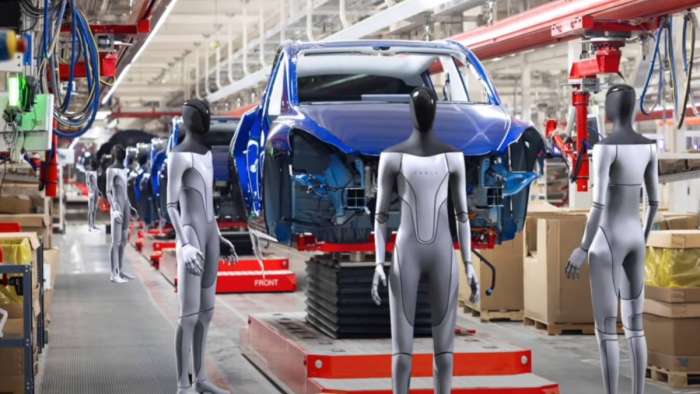 According to BestInTesla, the Tesla robot is a done deal. Tesla already has everything needed to make a robot work in a Tesla factory today. As such, we should see a Tesla robot in service very soon.
Advertisement

The first humanoid factory robot is a done deal. It's no longer a question of if, but when. This won't be an artificial general intelligence robot - that's not ready yet. But Tesla will have a robot soon with all the pieces needed to be a factory worker.

Most people don't understand Tesla's AI team. Elon Musk has touted that the AI team at Tesla is the best in the world - as are other people in the AI industry. The race for AI is not even that close. In a latest interview, Elon Musk said that he is confident that Tesla will not only maintain its lead in AI, but increase it too. This was from an interview called, "Connecting the Dots".

Tesla's overall effort in AI is beyond anything people in the AI industry have seen. Tesla is taking a complete and overall approach to AI and tackling all aspects. They are taking on sensor suite, the AI chip, the AI stack, the training and data collection, labeling, and even the training hardware. What Tesla has done here is above and beyond anyone else.

AI experts in the industry are not aware of anyone doing as much as Tesla - and that includes any of the worlds leading AI software companies. Elon Musk is not aware of any that are at Tesla's level.

Tesla is already attracting the best talent in the world. You can see in increased applications to Tesla after their AI event last year in 2021. For a company to excel in AI, that company must have those in the top 100 people in the world. This is what will cause Tesla to win this race.

Tesla will only increase their lead in AI, according to Elon Musk and other experts in the AI industry. Many view Tesla as just a car company still and to do so is a mistake. The biggest problem humans have ever tried to solve is AGI - artificial general intelligence. This will be intelligence that is greater than a human.

The human robot is a done deal. Tesla already has the full self-driving FSD code to navigate the real world. They have everything now. They have all the parts and the camera (eyes) to make a robot that can learn to work in a factory.

To be able to make a car drive around in real world traffic is a problem Tesla is very close to solving. To make a robot that has arms and legs that works in a factory will also be another major problem Tesla solves. The good thing is that the Tesla Bot will be doing repetitive jobs that require the same thing to be done over and over again.

The Tesla Bot will function like a human with the flexibility and movement of a human. The first robot will not need to be able to have a conversation. It will simply need to perform a repetitive task again and again. The mechanics of the robot will be much easier than the software. Balance and walking is already solved. Tesla will also be the perfect fit to teach the Tesla Bot to do its job at its factories.

Do you think we'll see the Tesla Bot soon? Is it truly a done deal?