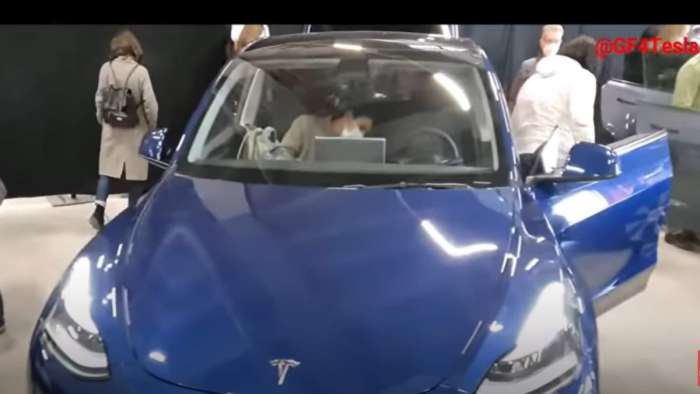 Tesla has begun testing Model Y vehicles with 4680 batteries in Giga Berlin. This is an important step for Tesla as it seeks to grow at 50% per year in production of vehicles.
Advertisement

A Tesla Model Y From Giga Berlin with 4680 batteries was produced in Giga Berlin. This is a revolution in car production, according to Elon Musk, who first reported this.

As time has gone on, and where we are today, we have a Model Y with a 4680 battery pack that brings together the car frame and the structural battery pack. Instead of the battery pack being treated as cargo, it is now part of the car frame. The batteries themselves are also bigger.

After a slow start of production, Tesla has reported that 1,000 Model Y vehicles were produced in Giga Berlin in one week. A few dozen in the long range variant were added by the end of June. Previously, only the Performance Model Y was produced and delivered.

There are continuing production improvements being made at Giga Berlin, with stops of production happening while these upgrades happen. This means we should start to see 2,000 to 3,000 Model Y vehicles being made per week by the year end at the latest.

The Model Y and 4680 Batteries

Elon Musk said that no 4680 batteries would be needed to boost Tesla's production to reach its targets for the years. Even at Giga Texas, Tesla vehicles are getting the 2170 batteries, which are Tesla's conventional batteries.

It's good to see Tesla testing the 4680 batteries with Model Y vehicles at Giga Berlin. Eventually, Tesla is going to need to ramp production using these batteries and figuring out the production process with them sooner than later will be important.

I believe Tesla will eventually figure out volume production of the 4680 batteries. It's a similar situation to the Model 3 ramp that happened in 2018 and caused Elon Musk to get all hands on deck to handle the situation. The 4680 batteries use a new architecture and process and this is going to take time for Tesla and its employees to master.

What do you think about Giga Berlin's Model Y with 4680 batteries? Will Tesla figure out how to reach volume production with the 4680 batteries this year or next year?

For more information, please see this video from Ryan Shaw: