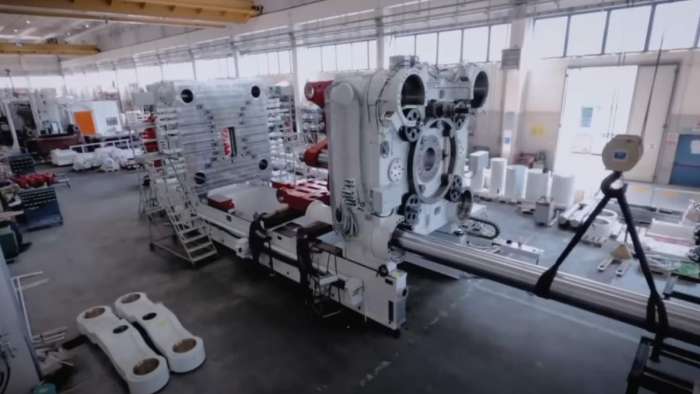 Tesla has an ultimate advantage with the Idra Giga Press. They've been using this technology for a long time and it helps them make single pieces instead of multiple pieces of a car, resulting in higher quality, a lighter vehicle, and cheaper cost.
Advertisement

Tesla uses Idra's multi ton Giga Press and it gives Tesla an ultimate advantage. Unless other auto makers adopt this technology, they will continue to fall behind.

The Giga Press is a different tool than just about anything out there and it all came to be with Tesla wanting to find a machine that could help them more rapidly and simply ramp production volume.

Sandy Munro also took a tour of Idra's facilities in order to better understand the Giga Press. This tool should be thought of more as a factory than a tool. Sandy Munro looked at Tesla's vehicles and how the frames are being constructed.

For instance, the first Tesla Model 3 in 2018, had multiple parts and fasteners that put the frame together. Tesla has evolved since then to the Model Y now in 2022 that is done with a 3 piece casting. Tesla has gone from a dinosaur to a world-class design of the 3 piece casting, 2022 Model Y.

Anyone not using a casting machine in today's manufacturing world is not evolving to keep up with what is going on and those companies will not survive unless they adapt.

How Much Better Casting Is

Sandy said that part of the Tesla Model 3 from 2018 should basically become one part. The next iteration of the Model Y in 2020 showed that specific part being one part. But Tesla didn't stop there. They took the rest of the frame and made it one part.

Casting is a superior technology. There doesn't need to be any heat treatment. The structure is made in less than a second. That means there is no induced stress causing odd dents or bends in the material. The advantage is that you can create die casts, which are identical pieces, replicated for each car. There is little to no room for error.

There are now holes where fasteners used to be and the material is much stiffer and firm than the previous cars that were made at Tesla. You will have a lighter car made with less pieces when you use the single castings and the car will be less likely to break over time. There will also be less creaking and noises associated with multiple parts fastened together.

The concept is very simple. Toy cars have been doing this for a long time. It's going to be tough for legacy auto makers to just go to Idra and get a giga press and catch up to Tesla. There is a period of ramp up to learn how to use the Giga Press. There is also the demand for the die casting machines. There is also the time to ship the machines.

Tesla has a big advantage in that they have been using the Idra Giga Press for a long time. Will this advantage continue? Will a technology better than a Giga Press come forward?

For more information, see this video by Dr. Know-it-all Knows it all: