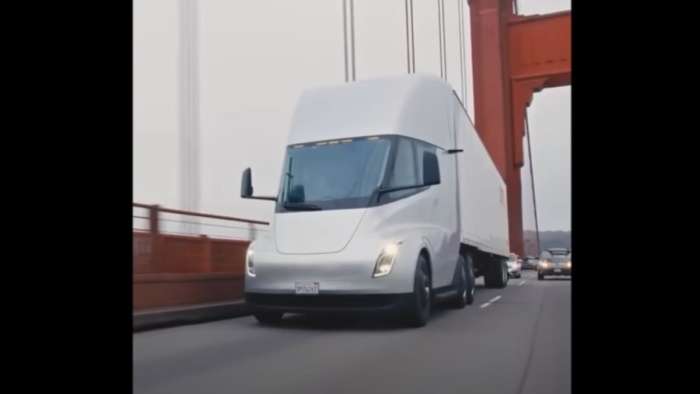 A Tesla Semi was seen driving along the San Francisco bridge. It's a majestic and beautiful, along with quiet, vehicle.
Advertisement

This is the first time the Tesla semi has been recorded driving on public roads like this. It could have been the same model seen earlier on the streets of San Francisco.

Tesla has begun production of the Tesla semi for PepsiCo. With news of Giga Berlin and Giga Texas, along with the new Model Y with 4680 batteries and Cybertruck, one can forget about the Tesla semi.

Tesla will be able to open up a new market with the Tesla semi. It will produce Tesla semis for companies that require shipping of large amounts of products. PepsiCo is just the first contract for Tesla.

Right now the list of companies using the Tesla semi is small, but as the vehicle gets tested and shows reliability, along with the bugs being worked out, we will start to see more and more of the Tesla semi on our roads.

Perhaps the next semi you see while on the freeway will be a Tesla semi!

Is this semi from Tesla just a test vehicle? Are we going to start to see more sightings of the Tesla semi?

John Goreham wrote on January 12, 2022 - 4:34pm Permalink
Such great news! I live in Metro Boston (against my preferences) and near a major highway. The federal noise pollution laws are ignored and the Semis pollute the environment in more than one way. I hope Tesla's semis and Toyotas as well do very well in the market. It pains me to see personal vehicle EV mandates lead commercial mandates. Keep the coverage coming!