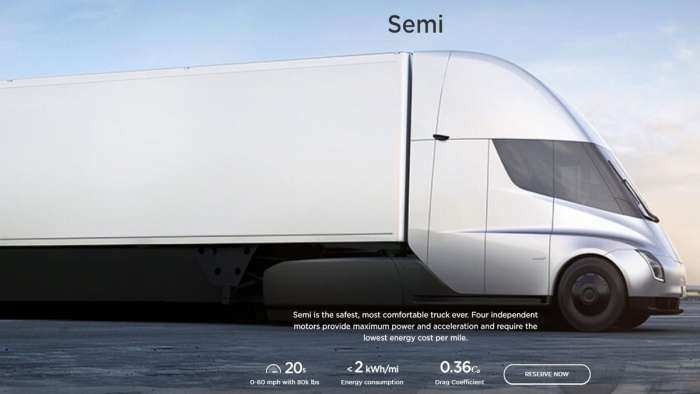 We have recent news of the Tesla semi possibly going into production today. This has been many years in the making and will create the most profitable vehicle for Tesla, even more so than the Tesla Model S Plaid and the Tesla Roadster. In addition, it will be the most impactful for a clean environment.
Advertisement

The Tesla Semi would be @Tesla's most important hardware product to date.

The semi trucking industry is ripe for disruption due to the economics of diesel fuel -vs- an electrically powered semi truck. This is yet another part of the Tesla master plan part 2 in which Elon Musk stated that Tesla will build a vehicle to address all major segments of which a Tesla semi truck is one (the Tesla "Model 2" is also another vehicle in that plan).

The world awaits the most important deflationary force we've seen in transportation since economies of scale for diesel fuel kept prices low while GDP compounded at 8% for decades.

The Tesla semi is going to be Tesla's most important vehicle in terms of profit and impact to the environment with clean energy.

Tesla is planning to produce 5 semi trucks per week to start with and will take place at a building near its Giga factory in Nevada. I believe Tesla will ramp to many more than this over time. Sources say that the final debugging is taking place which means production is just around the corner.

Elon Musk did a Tesla semi unveil back in 2017 and has reiterated the importance of bringing the Tesla semi into the world. Tesla will use its semi trucks for its own operations to starts and will then start producing them for other companies, like Pepsi Co.

Will Tesla Semi be Autonomous?

The Tesla Semi will be the best semi truck on the market and greatly reduce the cost of trucking just by being an efficient electric vehicle alone. But there is a hidden aspect to the Tesla semi that is even more important than the more efficient fuel and energy usage. It is autonomy - Tesla and its full self-driving system.

A Tesla Semi truck has to drive mostly in a straight line for most of its driving. Only a small part of its driving will be complicated when it has to go to its destination either in a city, or at a warehouse to deliver its goods. This means to me that a Tesla semi will be able to take advantage of autonomous driving sooner than Tesla releasing a level 5 autonomous robotaxi.

When do you think the first Tesla semi trucks will be delivered to customers? Will this be Tesla's most profitable vehicle?

Tangible wrote on July 20, 2021 - 6:08pm Permalink
yep, 250 trucks per year will make a HUGE impact on the industry's costs, the "ENVIRONMENT" and all things Tesla. Well, the HYPE will, anyway......and keep paid-per-word writers in clover for a while.