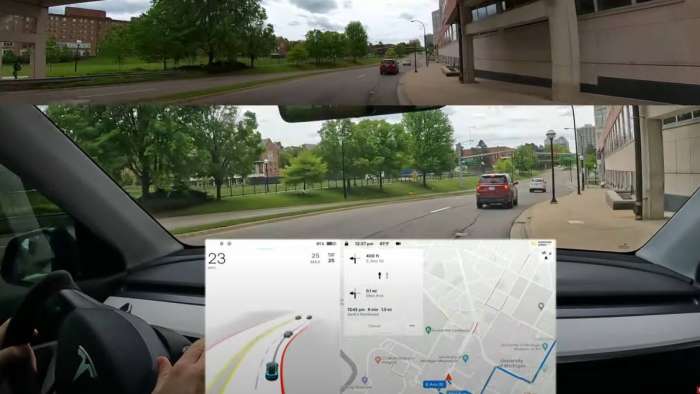 Tesla FSD v11 in Shadow Mode and Why This Matters

Tesla FSD v11 is running in shadow mode on Tesla vehicles. This version will combine auto pilot and auto steer on city streets - the one stack to rule them all. Let's go over why this is significant from Dr. Know-it-all.
Advertisement

Tesla FSD v11 in Shadow Mode and Why This Matters

We have a video from Dr. Know-it-all, who talks about Tesla FSD v11 and how it is running in shadow mode. This version is "the one version to rule them all" and will combine auto pilot with FSD (auto street on city streets).

There was a Tweet from "Green the Only" posted a few days ago about Tesla's FSD (full self-driving) and that version 11 is in shadow mode, running in the background of Tesla vehicles. This is very good news for those wanting to see version 11 as soon as possible.

What is shadow mode? It is version 11 of FSD, which is not released yet, running in the background, but not seen by the driver of the Tesla. It is running and making predictions of what to do, but not actually doing it. Tesla will take this data and analyze it to see if version 11 will be safe to release.

When will we see version 11 released then? It will get released once Tesla has finished all their testing and feels like it is safe to release. I think we'll see this version by early July of this year and once this latest version gets released, we are going to see much quicker progress and releases for Tesla FSD.

Version 11 is a single stack, combining highway auto pilot and steering on city streets. This will greatly simplify the code base for Tesla and make it a familiar experience for the owner of the Tesla. I would expect to see a release cadence of 2 weeks again once the single stack, version 11 is released.

James Douma recently went on Dave Lee's YouTube channel for an interview and he stated that the shadow mode for version 11 would only run on vehicles already with FSD beta. If that is true, then there are just over 100,000 vehicles running with this and not all 2 million plus Tesla's would be running this.

Tesla FSD v10.12.1 is performing very well from many people on YouTube. There is starting to be more drives without interventions. It seems the most problematic things that happens is random lane switching or the navigation not quite recognizing a dead end or some strange case in the road.

I'm looking forward to seeing version 11 released. It's getting closer to production ready and it seems Tesla has been testing this since August of last year. I expect to see it in early July still and am excited to see what changes happen with it and for future releases.

What do you think about FSD version 11 running in shadow mode? Will we see it released by July of 2022?