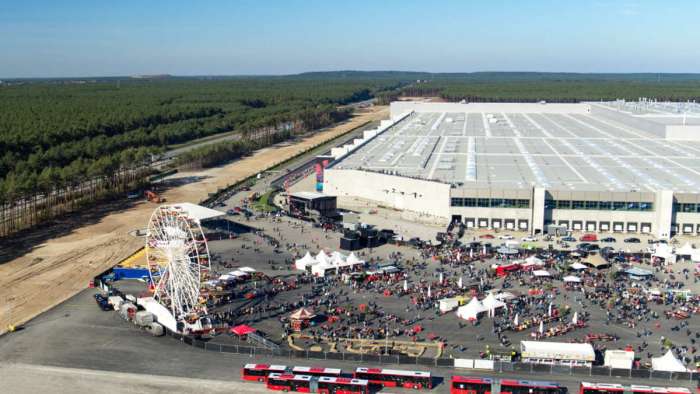 Giga Berlin About to Come Alive

Giga Berlin is about to come alive - sooner than expected, and we think that deliveries will happen faster than anyone expects.
Advertisement

Giga Berlin is about to come alive with unexpected news of approval. This is much sooner than I expected. Let's look at the implications of Giga Berlin coming online.

I believe Giga Berlin will produce around 500 vehicles this year. It will be the initial set of vehicles before the ramp up next year.

BREAKING: Tesla Giga Berlin production to start in December. As many as 30k vehicles will be manufactured there in the first half of 2022.

With the announcement of production beginning, we can likely add between 500 to 1,000 vehicles from Giga Berlin to Tesla's total deliveries in 2021. I think the same can be said for Giga Texas.

This will add to a surprise Q4, 2021 results for Tesla. In addition to that, Elon Musk has said he will be on the quarterly earnings call for Tesla for the Q4, 2021 earnings (sometime in January) to talk about the Cybertruck.

Why such a fast rate of increase from Q2 to Q3? I think it's because of momentum. When Giga Shanghai first opened, it started producing a couple thousand vehicles a week pretty quickly. Giga Berlin is a newer factory and more efficient and I think we'll see a ramp up that is exponential in increase and not linear.

I think part of this will be the supply chain shortages easing up in the second half of 2022. I don't think anyone is accounting for this in Tesla delivery numbers. That and efficiency improvements will be the primary reason Tesla delivers so many vehicles in 2022.

Here is what I think Tesla will do in total deliveries in 2022. I think they are going to shock everyone:

Total: 2.59 million. Is this real life? This is about double street estimates.

Giga Berlin in 2023 and beyond

As Giga Berlin continues to ramp production, I think we'll see it expand and reach multiple millions of vehicles being produced. What is the maximum we'll see? I can see it producing up to 4 million vehicles annually. Just from Giga Berlin. This is a massive number.

Why do I think this? Because Giga Shanghai is going to reach a 1.3 million run rate next year and continue to grow. And Giga Berlin is a next generation giga factory. I can't wait until Tesla announces another giga factory in India or South America, or Canada. Each factory is going to blow the previous factory out of the water.

Expect to see good numbers from Giga Berlin now that the approval is out of the way. That is a very nice bonus to have production starting this year. I wasn't expecting it to happen until March of 2022.

What do you think of Giga Berlin coming online? How many vehicles will they produce in 2021 and 2022? Will they reach a yearly volume of 4 million?