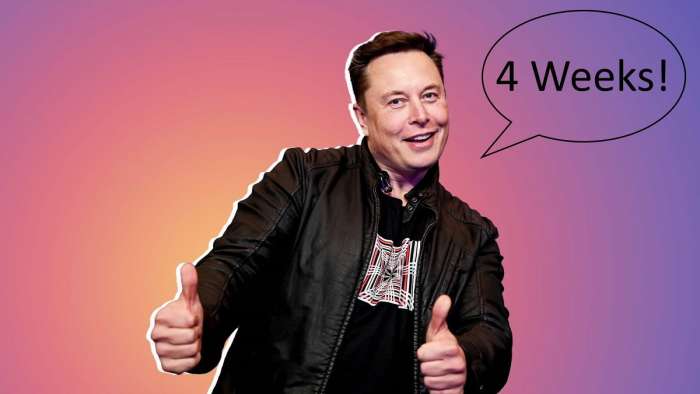 We have a Tweet from Elon Musk stating that the Beta wide release (version 10) of its full self-driving software will open up to wide release in about 4 weeks. The question is, is this in Elon time, or real time? Let's find out!
Advertisement

We should be there with Beta 10, which goes out a week from Friday (no point release this week).

It will have a completely retrained NN, so will need another few weeks after that for tuning & bug fixes. Best guess is public beta button in ~4 weeks.

FSD Beta 10 Will Be Next

Elon Musk has stated the there will not be an FSD version 9.3 released. The reason for 9.3 not being released is the next release of FSD will be version 10, which will combine the vision neural network code for city streets and freeway driving.

Elon Musk mentioned that there would be a couple weeks of tweaks and fixes before version 10 is made widely available to the public for beta testing. This means that anyone with a Tesla vehicle and FSD purchased (either an upfront purchase or a monthly subscription), will be able to experience a Tesla driving itself.

As always, the car is not yet autonomous and full attention and hands on the wheel must happen at all times and the driver must be able to take over at any moment.

What Comes After Beta 10?

The thing that I think we might see more of is news articles stating that a Tesla driving itself was involved in some kind of accident. So far, there hasn't been much merit to Tesla cars without a drive causing accidents and we've had no updated news from the supposed Tesla Model S Plaid fire. I believe the news is sensationalized against Tesla because Tesla is in a technological lead and it's going to take a long time for other auto makers to even get to where Tesla is right now.

Once everyone has had time to digest FSD and its beta wide release, I think we are going to see a few months of testing, fixes, feedback, until finally, the FSD will be taken out of Beta and will be a feature of all Tesla vehicles that is available. I don't think we will see robotaxis until we start to see 0 intervention and 0 disengagement drives happening regularly - and I mean weeks and weeks of driving without issue.

I would also expect that Tesla will announce some kind of fleet-wide program for their autonomous taxi network at the time FSD is showing to be superior to a human driving. I think this will be sometime next year.

What do you think about Elon Musk's statement about FSD beta being widely released in 4 weeks? Will this happen, or will there be a long delay?

tangible wrote on August 27, 2021 - 12:26am Permalink
FSD is a fantasy. It's a great marketing ploy and laudable goal, but unachievable in the near future. The legal, financial, and moral responsibility issues are FAR from knowable at this time. Let alone surmounted. Government regulation awaits, and it's way behind the curve.
Timothy Boyer wrote on August 28, 2021 - 9:52am Permalink
The safest bet is that it will be later...but, that's probably a good thing considering what is at stake for everyone.