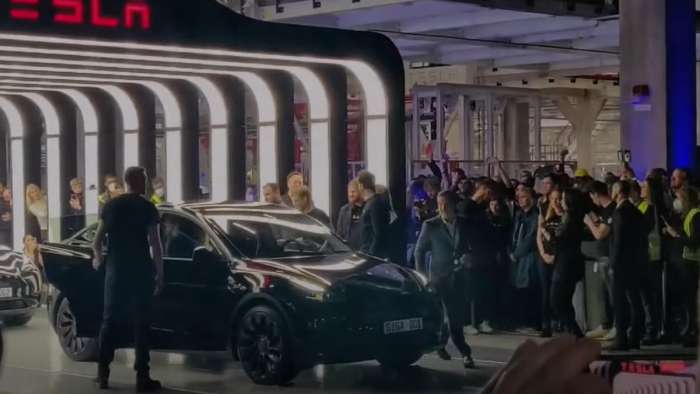 Recently, while at Giga Beriln, Elon Musk announced a new battery type, a manganese cell. Elon Musk talked about the need for many different kinds of batteries due to the large demand for electric vehicles and energy storage.
Advertisement

Elon Musk says Tesla is working on a manganese battery cell. There were many people at Giga Berlin were there was a celebration for the first 30 Model Y vehicles being handed over to the new owners. At the fellowship with the employees, he made an important announcement about a future Tesla battery.

Elon Musk announced yesterday that Tesla sees potential with battery chemistry with a manganese cathode. Elon Musk said the industry needs to focus more on the battery supply chain and the minerals involved.

During a speech to Tesla Giga Berlin, following the delivery of the first 30 Model Y vehicles, Elon Musk was asked about graphite batteries. Elon Musk said he was skeptical due to the complexity of making graphite.

The Potential for Manganese

Elon Musk said there is an interesting potential for manganese. This means that Tesla is already doing some research and exploring using manganese in its battery cells for a while. If you remember at battery day in 2020, it is relatively straightforward to do a cathode that is 2/3 nickel and 1/3 manganese, allowing for an increased volume of battery production due to not having to use as much nickel.

It makes it sound like manganese could be an additional solution to battery production. We may ultimately need hundreds of tons of manganese and other raw materials in order to get the amount of batteries needed for the current and future demand of EVs and energy storage.

Several groups have published research papers on the promising options of manganese rich cathode batteries with higher energy density than iron phosphate and potentially a lower price than nickel rich batteries. Manganese is already used by Tesla in some battery chemistries, but it's not the primary component of any of them.

Many other companies have touted billions of dollars of investments in electric vehicle technologies. Without an investment in raw materials and battery production, those companies will not be able to reach volume production and meet the demand of customers for the future.

What do you think about a manganese battery cell? Will Tesla release this kind of battery soon? Are there any other battery types Tesla will make?

Bob wrote on March 24, 2022 - 4:00pm Permalink
What about when they go bad how will you dispose of them, We should polute the ground any more