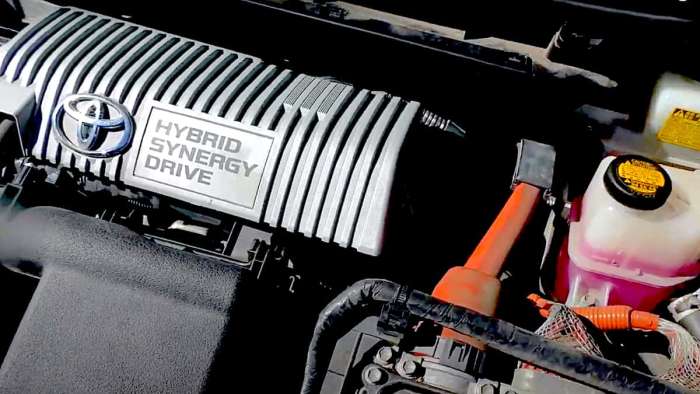 If you are a Toyota Hybrid car owner or looking to buy a used Toyota Hybrid, the chances are good that you will eventually have to deal with a common engine problem that costs approximately $5,000 to repair. However, here is an easy alternative solution that costs about $35 recommended by some mechanics. Plus, discover whether Toyota Hybrid repair and maintenance is beyond the shadetree mechanic’s paygrade.
Advertisement

While many internal combustion engine makes and models follow very similar repair and maintenance procedures, there are special considerations to be made when it comes to working on and maintaining a hybrid vehicle.

So, what does this mean for shadetree mechanics? Basically, it means that you are in what could be described as a Twilight Zone world for someone who understands ICE tech, but is less familiar with EV tech that is based on some rather high-voltage repair and maintenance scenarios that can be daunting and dangerous…if not confusing.

In other words, procedures you could normally do with most ICE vehicles, have some caveats that could harm you and your car when not properly trained in how to do similar repairs in this ICE/EV netherworld.

The good news is that there is some help out there to guide you if you are the owner of a Toyota Hybrid vehicle.

A recent video by YouTuber Scotty Kilmer, opens the hood of a Toyota Prius and points out some of the pitfalls and hazards of working on a hybrid vehicle and offers some sage advice on what a typical shadetree mechanic can still do---and should not do---when it comes to hybrid vehicles maintenance and repair.

As an example of what can be done for a common repair endemic with some models of Toyota Hybrids, Scotty takes the viewer into the costly problem of a blown head gasket.

A blown or leaking head gasket is a serious problem that can start out with an annoying engine misfiring and rough running that is due to coolant seeping from the block into the cylinders where the engine is struggling to fire the fuel-air mixture, but is impeded by the contaminating coolant. It is sometimes described as a “Death Knock”---particularly when first starting an engine after sitting parked overnight.

Symptoms of a head gasket problem include:

• White smoke coming from the tailpipe.
• Bubbling in the radiator and coolant reservoir.
• Milky white coloration in the oil.
• Unexplained coolant loss with no leaks.
• Engine overheating.

Causes of a blown head gasket are often traced to:

• Coolant issues such as an external coolant leak (or owner-induced poor maintenance failing to monitor the coolant level periodically) which results in not enough coolant to adequately cool the engine block, causing warping of the cylinder head and thereby exacerbating the coolant loss even further.

• Coolant that was replaced during a fluid flush, but improperly replaced leaving air trapped within the coolant passages and thereby preventing or decreasing normal block cooling.

• Some vehicle models are more prone to head gasket leakage over other models. For example, some sources point to that hybrid engines undergo constant heating and cooling cycles that causes the head gasket to lose its sealing properties over time.

Here’s a product video explaining head gasket leaks as an illustrative example; and, because this is the product used by Scotty in the following Toyota Hybrid vehicle video:

Symptoms of a Blown Head Gasket

That intro explained, here is the Toyota Hybrid video where Scotty discusses Hybrid vehicle care and repair, followed by his diagnosis of a failing head gasket problem and how it fixed with a $35 solution in a can. Please note, only the first 7 minutes and 5 seconds need viewing.

A Sad Day for Toyota Owners

A Video Update---In case you missed it, Scotty reported afterward that “…the customer called me after his road trip and said the sealer fixed his car. Just remember this is a last resort move only if you can’t afford to fix the head gasket.”

Can You Really Fix a Blown Head Gasket with a Gasket Sealer in a Can Fix?

Apparently, using what I like to call a “Mechanic in a Can” solution, a search over automotive discussion groups reveals that in most cases, this canned gasket sealant fix does work and can last from several months to even a few years.

The primary benefit of this is that rather than paying $5000 for a traditional (and mechanically preferable repair) car owners can solve their head gasket problem with a $35 fix. However, it also means that someone trying to sell a used car with a head gasket problem could also take advantage of this inexpensive trick during a scam.

Caveats to using a canned gasket sealant include two must-do’s:

1. Only use a product that has earned a good reputation---“Blue Devil” and “Bar’s Blown Head Gasket Repair” appear to be the favored choices posted online.

2. You must follow the directions to the letter no matter which product brand you choose because it can mean the difference between it working, or not working and causing additional engine problems.

It should be stressed that the canned gasket sealant method is really meant only as a temporary emergency fix and not considered to be a real repair. However, sometimes we do what we have to do; and, it’s a good warning to used car buyers who might be scammed with this fix.

For more used car articles related to the topic, be sure to check out the following linked articles “How a trusted mechanic saved a Toyota owner thousands; and, “Two service center scams that are easy to spot.”

Rjparker wrote on September 23, 2021 - 11:55am Permalink
In a Prius 1.8L the head gasket symptoms listed rarely occur, especially in the early stages when a head gasket alone can solve the issue. For advanced diy, a new head gasket with no hydrolock damage might be $500. The only sure sign in a Prius is the onset of severe cold start knocks and shakes. Not even an obvious coolant loss as the leak initially seals off with engine heat. I think it is important for internet bloggers like you and influencers like Scotty to point out that block sealers frequently clog up heaters, radiators, thermostats and magnetically coupled water pumps in our Prius engines. Given the fact that sealers rarely work for more than two or three months (assuming the leak was recognized early) the sealer has now added complications to the integrity of a subsequent hg repair. Maybe causing overheating conditions after a $2k-$5k head gasket repair. The downsides of sealer use for the owner were not highlighted in this article or the two referenced videos. Finally, we can expect more beginners to use these short term solutions to fool the next buyer. Unfortunately there are not obvious signs of sealers if the flipper is dedicated to hiding it.
Timothy Boyer wrote on September 23, 2021 - 1:13pm Permalink
Yes, you are correct---using a gasket sealer could lead to possible damage to a vehicle, which is why I pointed out at the end that this is really only meant to be an emergency fix. Going through some groups comments on gasket sealer use, most appear to be positive; but then again, this only hearsay and not quantitative evidence. Vehicle flippers have been using this kind of stuff for many years--I would expect that many dealerships do this as well. It would be interesting if there was a study to put numbers to the risk of this practice. Thanks for the input!
jg wrote on September 23, 2021 - 2:58pm Permalink
I'll second the restricted use of magic sealers and take it a step further. Once one of these products has been introduced in an engine -- it will always be there. So the disadvantages mentioned above can exist or surface for years after a fix (like replacing a head gasket) has been completed properly. You might be able to flush out the majority of the sealant (I like to use the analogy of sand circulating in your engine), you'll never get it all and it will slowly clog your engine's arteries and build up in heater, radiator, and block crevices with undetermined effects of limiting proper heat transfer.
Timothy Boyer wrote on September 23, 2021 - 8:50pm Permalink
Yes, and I imagine that it's the same thing with those manifold leak fixers in a can as well. Chris Fix shows how to use one to stop exhaust from leaking from the manifold, but I'd hate to be the one to try to get that stuff off to fix it properly later on. It's an emergency patch, but knowing that when it comes to taking an old exhaust manifold off, it often means typically breaking off the bolts into the block---I can't be judgey about it when someone cannot afford to pay someone to do it right. But not the other hand, God knows how often used car problems are hidden this way too. Oh well. Anyway, thanks for the input---much appreciated.