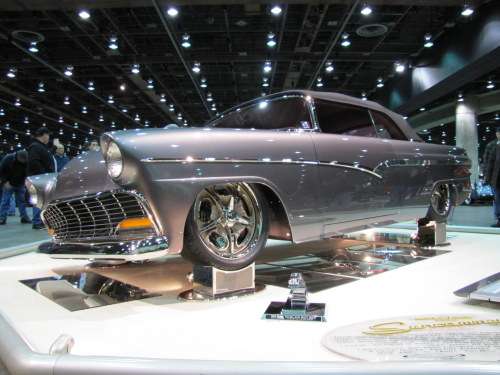 Captured video events on the floor of Cobo center show Bruce Ricks and his team from Sapulta, OK celebrating and posing after winning the 2011 Ridler Award, which includes the Builder Award as well at the Detroit Autorama 2011.
Advertisement

The flawless body work is evident in the lighting at Detroit's Cobo Center.

That 427 SOHC engine is surely a beauty, too; so modern and clean in the engine compartment, including the dual in-line four barrel carburetors.

As a follow-up to the news alert last night, TorqueNews.com has authorized the video below as another way we communicate auto news to our readers.

Making the Pirelli Great 8 Finalist list was already a major acomplishment, but the 1956 Ford owned by Bruce Ricks went one step beyond and met the criteria for the Ridler.

Aside from meeting the criteria of a first time showing, the '56 Ford also met the three key elements for the judges:

And, lest anyone forgets, anyone who forgets those three elements should not even bother participating next year.

Again, congratulations to Bruce Ricks and his team of builders.

The Ridler Award officially ended the Detroit Autorama 2011, which was immediately followed by cars firing up, cruising out of the building. More on the sights and sounds of that event in the next video report.