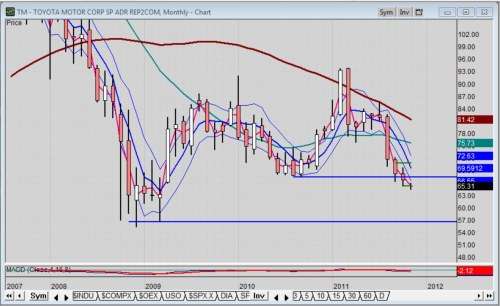 Toyota stock was just trading over $69 last week; now it's treading water at the $64 level after the company announced it will maintain production cutbacks in Japan, North America and Southeast Asia, due to parts shortages resulting from the flooding in Thailand. Question is, what is Toyota stock's next price support level?
Advertisement

Despite no physical impact on the plants from the floods, three Thai assembly plants will be kept off-line through Nov 12th. That alone will assembly affect plants all over the world, mainly in Japan, North America and Southeast Asia.

In the meantime, Toyota stockholders have had to deal with the general market sell-ff from the Greek problems; and now it has to deal with the sell-on-the-news effect from the Toyota announcement. As a result of both, the stock initially sold off on Oct. 31st, and has since maintained the lower levels of price.

Of course, it is too early to say how Thai flood situation will affect Toyota’s earnings. Bad news, though, is the fact the company stated it doesn't have an update on which parts are in short supply.

Wait a minute. With just-in-time inventory, Toyota doesn’t know which parts are in short supply? How can that be?

Uh, that will surely affect the bottom line.

So, where should traders look for support for Toyota stock at this point? Fact is, major support from 2010 at 67.57 has been broken and retested for weeks now. This latest dive below it is just another day in that news.

Now check the monthly chart provided here. The next level of major support dates back to the lows of late 2008 and early 2009 which stands at the 57 level. Will TM test that level? I do not know for sure, but if the European issue continues, if the U.S. economy continues in high unemployment mode, and if natural disasters keep affecting Toyota, then the stock just might test that level.