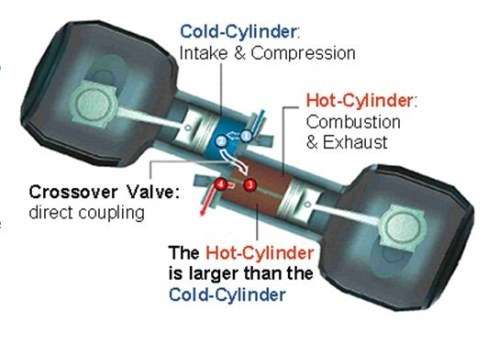 In a private email from Dr. Oded Tour of Tour Engine, it is clear that the Tour Engine Prototype 2 will be fully operational before the opening of the SAE World Congress which opens next week in Detroit. And TorqueNews will be there for interviews, photos and videos.
Advertisement

For the record, this reporter has been covering the split-cycle engine developments of many companies. However, one company stands out as making great progress for its unique design arrangement, that is Tour Engine.

Dr. Oded Tour, the son of the Hugo Tour, the inventor and developer of the opposed piston, split-cycle engine, was kind enough to provide me with a copy of the poster that his company will use at next week’s SAE World congress. There was no confidential material on the poster so I was welcome to report any part of the information presented.

This is not my first coverage of Tour Engine or the technology. One thing that did surprise me, though, was the number of companies vying for recognition by literally splitting the 4-stroke Otto Cycle into two separate phases: 1) the colder intake and compression phase; 2) the hotter power and exhaust phase. Key is that both cycles occur in parallel.

Most significant of the Tour engine is its opposed piston arrangement. Dr. Oded Tour spent considerable time last year educating me on the thermodynamics and the advantages of such an arrangement. It was a one-on-one tutelage that I will always remember

Nonetheless, Tour is not the only split-cycle play in the world. The poster openly reveals Scuderi Engine, which I have covered extensively the past two years as well, and will cover again at SAE. I heard of a few more but never had any dealings or contacts. They include, Zajac Motors, Speka Design and Thring Design.

The fact that Tour is willing to admit these other companies exist says something about the character of Oded and Hugo Tour, as well as the design differentiation of Tour Engine. Again, opposed pistons have a greater thermodynamic efficiency, and that can be proven by Dr. Tour. Just ask him. The lack of connecting tube helps provide the basis for what Tour says is “superior thermal management.”

Is it enough to make a significant difference among the competitors? I do not know for sure; but rest assured Tour is at the forefront of split-cycle engine development.

I have always been intrigued by the credentials of Hugo Tour. As a former lieutenant-colonel in the Israeli Air Force, Hugo held key positions including base commander of the IAF Mechanical and Engineering control laboratories (Yahav). He gained vast experience there in engine technologies and attained the reputation as an exceptional “out of the box” mechanical troubleshooter and problem solver. End result was a passion for combustion engine innovation the past 20 years which ultimately led to the invention of TourEngine™.

His son, Oded, received his BS, MS in Biology and a Ph.D. in Neurobiology from the Hebrew University of Jerusalem, and is co-founder of Tour Engine Inc. As overseer of the entire range of operations including interactions with OEMs, investors, corporate and IP attorneys, academia and government, he also participates in the R&D of the TourEngine™ prototype and thermodynamic analysis.

Expect a TorqueNews Interview at SAE

While I have met Oded Tour, I will finally have the chance next week to meet Hugo Tour in person. I guess I have this fondness for father-son relationships, as I was extremely close to my father and worked with him on his inventions. Point is, I can relate.

Frankly, I’m getting impatient with American OEMs these days. The high cost of electrification needs a competitor. After all, 2016 is just around the corner, and 2025 with its host of MPG targets will not be handled totally by electrification, in my opinion. Even the government’s own reports say that by 2030 the vast majority of automobiles will still be propelled by internal combustion engines. So, the MPG answer has to be found within the ICE so as to reach that 56.2 MPG target. Read Why Obama's proposed CAFE standards to 56.2 mpg IS feasible

Now, I do not doubt that electrification to some degree will play an important part in the future of the automobile, but cost will remain a crucial factor behind acceptance. However, the split-cycle engine has the air-hybrid quality to it that I believe is much too important to ignore.

My innermost concern is that a European or Asian company will get the jump while U.S. automakers play games in their labs, because of the not-invented-here syndrome. It is the reason that Honda and Toyota got better mileage with their use of the Atkinson cycle of their engines. Let’s not ever let that happen again.