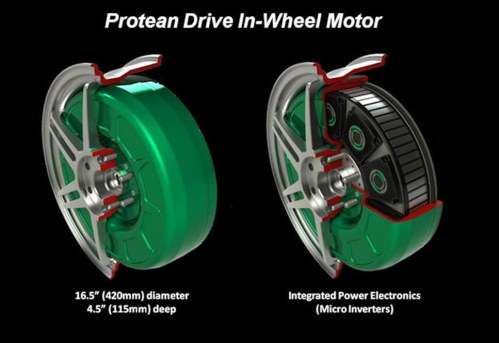 Protean Electric will orally present “Unsprung Mass with In-Wheel Motors (IWM); the Myths and Realities – Closing the Circle” to address the skeptics of unsprung mass at the 2011 SAE World Congress in Detroit in April.
Advertisement

Protean Electric, the designers and developers of the Protean IWM, is a privately held US-owned company with headquarters in the UK and offices in the USA (Detroit), UK and Germany.

According to an article written by Lindsay Brooke for EV.SAE.org, the presentation at SAE World Congress is scheduled to be delivered by company Chief Technology Officer Andrew Watts, in collaboration with Martyn Anderson, Chief Engineer at Lotus Engineering, and Damian Harty, a technology consultant with Dunamos Ltd.

The session will especially discuss the results of Protean Electric-commissioned studies recently conducted by Lotus Engineering and Dunamos. The studies investigated the dynamic effects of unsprung mass related to IWMs in mainstream hybrid and EV applications.

For the record, my own perusal of technology displays has shown in-wheel motors having been shown on technical displays at SAE and the NAIAS before. Protean Electric especially allowed its four-wheel drive electric F150 (fitted with 4 Protean Drive in-wheel motors) to be featured in the Ride & Drive event during the 2011 North American International Auto Show, held at Detroit's Cobo center.

Fact is, many engineers believe in the benefits; otherwise, they would not be there. However, there is also a large group of industry skeptics.

According to the Protean Electric website, the company is already a leading clean technology company that designs, develops and manufactures Protean Drive™, the most advanced in-wheel electric drive system for hybrid and battery electric vehicles.

Reading into the words of Tom Prucha, Principal Applications Engineer in the U.S. for Protean Electric, a U.K.-based developer of in-wheel traction motors (IWM) for electrified vehicles, the technology’s many benefits outweigh the skepticism.

Fact is, IWMs have been a potential engineering solution for hybrids and EVs since they were first used on the Lohner-Porsche as far back as 1899.

Critics cite, however, the technology’s challenges. They state the weight of an electric machine, even when compact, plus its integrated power electronics into the collective mass of a vehicle’s road wheels, including tires, brake calipers and rotors, suspension knuckles, etc., will negatively affect vehicle dynamics. Their main concern centers on grip, active safety, and ride quality.

The article especially noted that when an expert panel of OEM engineers at SAE International’s recent 2011 Hybrid and EV Symposium was asked whether IWMs (also known as wheel-hub motors) were a viable option for near-term production vehicle applications, no one replied affirmatively. Some cited unsprung mass as a significant reason.

Looking back to a 2009 interview with AEI, Tesla Motors Chief Technology Officer JB Straubel noted as well that while his engineers considered IWMs, they instead chose a single-motor layout for the company’s initial vehicle programs. My own interview with Tesla engineers have revealed the same.

In its attempt to dissuade the fear mongers, though, Protean Electric decided to tackle the topic head-on with a technical session at the 2011 SAE World Congress in Detroit. Will the company succeed in changing industry direction?

It will surely cite how a stock 2007 Ford Focus was compared with an identical vehicle modified with 66 lb (30 kg) of ballast fitted to each wheel. The weight was distributed between rotating and non-rotating, unsprung masses as to broadly replicate Protean Electric’s PD18 (18-in diameter) wheel-hub-motor unit. Furthermore, the project plan included three phases of analysis and testing.

In Phase 1, the company focused on modeling with different modifications, including suspension spring, bushing, and damper rates, and different tires and pressures, and their effects on the IWM-equipped vehicle. It was then determined that simply fitting a standard Focus ST suspension as an upgrade on the stock base car would be a good practical solution.

So, in Phase 2, the stock vehicle was modified with the Focus ST suspension, which also included revisions to the front and rear spring rates, dampers, and the rear anti-roll bar.

The studies concluded that while the vehicle carrying the greater unsprung mass at each wheel did display perceptible differences compared with the stock vehicle, those differences were minor and can be mitigated using “normal engineering processes within a product development cycle.”

By fitting the upgraded ST-level suspension to the car replicating one equipped with Protean PD18 in-wheel motors, the vehicle’s handling and on-center tracking were improved back to reference. That should be enough to convince the skeptics, but the auto industry has a way of avoiding one technology over another. Look at lithium-ion batteries over air and hydraulic hybrids.

The hope is, the effort conducted by Protean Electric, Lotus Engineering, and Dunamos will help convince skeptics that the addition of 30 kg of unsprung mass per corner will not adversely impact overall vehicle dynamics and can be addressed fairly easily with cost-effective countermeasures.

Finally, I will be covering the SAE 2011 World Congress in Detroit and will tweet from from the floor of Cobo Center in Detroit.