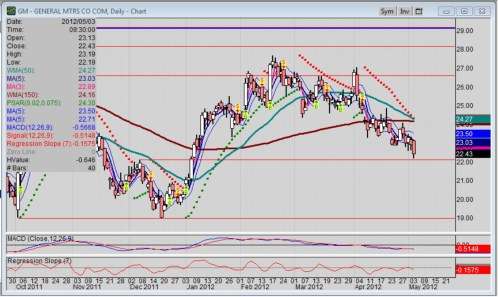 General Motors Company (NYSE: GM) announced first quarter earnings, but it is the market reaction to the news as in price dynamics that really counts for auto sector investors.
Advertisement

The official news release said that General Motors Company (NYSE: GM) announced net revenue in the first quarter of 2012 of $37.8 billion. Earnings before interest and tax (EBIT) adjusted was $2.2 billion.

Now comes the reaction of the market to the news, which, as of this morning, has GM stock still heading downward toward the past broken resistance level of 22.11. Will it hold? Your guess is as good as mine, as the next lower level is the major low of 19.00.

Will that level be tested? Will it hold if tested?

Just to give you a further clue, recall my report on the April sales report just a few days ago. Read: GM stock reaction to drop in April sales looks meaningless, awaiting earnings. and now that earnings are out, it appears the investors were reacting ahead of schedule; but it's hard to know for sure until it actually happens.

GM forward-looking statements surely seem to be a mixed bag, too. The company raised 2012 industry outlook from 13.5M-14M units to 14M-14.5M units. So, far so good. Then April sales do not appear to be a major concern, as GM knows it will get its share of the pie.

Still, inventory in April did not make anyone happy either. It raised to 713,008 from 701,889, but the projection for more sales by the industry will reduce GM inventory if all goes well.

Most notable, though, was that report about the potential being high for the next GM executive to be female per Reuters. I say it’s about time.

Then the Detroit News offered a story that GM was laying off 100 white collar workers. I read that as simply more clearing of cobwebs or what GM thinks are cobwebs. Even Ford is offering another round of pension buyouts. Read: Ford stock hits trading channel for a reason

Back to the GM Chart

For the record, GM stock is well below its IPO price. So, right now that is not the issue. Instead we need to concentrate on the more immediate prize zone, the price action between the 19.00 low and the 27.00 peak high from last November.

While I first read that spread as a decent opportunity to profit, question became: Which side of the trade should we take now that the Q1 report is out? Short-term traders prefer to watch reactions at the price support and resistance zones. Strategy is, look for those support and resistance levels, then try to take advantage of the general market price trend dynamics.

Right now, I still see support at the broken resistance level of 22.11. Then again, Q1 earnings for GM did not show a decline. So, will 22.11 be broken, at least in the short term? I think it will be tested as it came close this morning at 22.19.

Fact is, the general market as reflected by the S&P 500 Index is still in bullish trend bias even on a weekly chart. On a daily chart, the index is straddling the 50-day weighted moving average (WMA50). And the WMA50 is still above the WMA150; again a bullish trend bias.

So, that tells me that GM stock price dynamics are not subject to the general market’s overall trend bias, except perhaps a bit by the daily mood. However, Ford Motor Company (NYSE: F) is not doing so well either, being down today even after a positive report.

Just perhaps that old adage of selling in May and going away is taking place first with the auto sector stocks. Some advice of the day is, watch the price action and the reaction to the news. That adage is still viable.

Tsingshan's Threat to Tesla: EV Maker Is In Battery Crosshairs
Tesla-Funded Research Reveals One of The Biggest Mysteries of EV Battery
END_OF_DOCUMENT_TOKEN_TO_BE_REPLACED