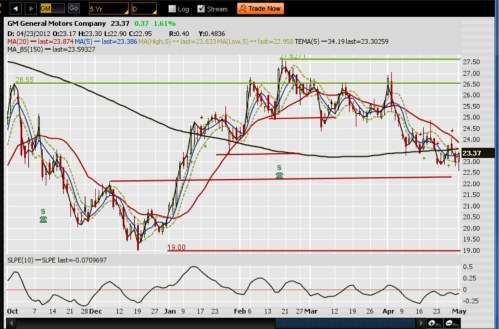 A lot of news has emerged out of General Motors Company (NYSE: GM) lately. And while the most egregious would seem to be the drop in April sales by 8.2 percent, the general market price dynamic appears to be even more powerful, not to mention the next earnings report.
Advertisement

Look at the chart. What do you see? A major drop in intraday price action? No. So, the reaction, or need I say lack of reaction to April sales drop, is important here. It also tells you what the market is focusing on - the earnings report due Thursday, May3rd.

Looking at the other fundamental news via various websites, like the collection from theflyonthewall.com , GM seems to be a mixed bag. The company raised 2012 industry outlook from 13.5M-14M units to 14M-14.5M units. So, April sales do not appear to be a major concern, as GM knows it will get its share of the pie. How much is anyone’s guess, though.

Most notable, though, was a report about the potential being high for the next GM executive official to be female. This from Reuters.

Then the Detroit News offered a story that GM was laying off 100 white collar workers.

As you know by reading any of my stock chart reports, it is the reaction to news that is important; which is precisely why I personally prefer technical analysis over fundamental analysis. In fact, I learned a great quip yesterday from another trader as to why he prefers technical analysis: technical analysis reflects immediacy. I tend to agree, just wish I wrote it first.

Now, everyone knows that GM stock is well below its IPO price. So, we can concentrate on the more immediate prize zone, the price action between the 19.00 low and the 27.00 peak high from last November.

Actually that points toward a decent spread of opportunities, especially by short-term traders. Question is, when will the up-moves return to the IPO price? Fact is, the 20 day moving average is still trending down.

So, all we can do at this point is look for those support and resistance levels, and try to take advantage of the general market price trend dynamics. Right now, I see support at the broken resistance level of 22.11. Then again, if earnings show a decline, that will likely be broken, at least in the short term.

On the upside, though, 27.68 is strong resistance. It will take a lot of sales and a lot of economic chutzpah to get past it with any meaning.

So, there you have it. Regardless of how the earnings report is received on Thursday, GM stock is in a box, a deep box where you can make a profit either way, especially with options. The recent outlook of more cars by the industry, though, is at the very least good news for GM.

Unfortunately, GM needs something other than a halo car like the Chevy Volt to climb out of the box. After all, Ford’s EcoBoost line sure outshines GM’s Ecotec right now from my viewpoint; and even the government admits that IC engines will be in the majority even by 2030. GM needs that HCCI etchnology on the road soon; meaning, GM needs an IC engine splash, because that's where the sales potential is.

GM needs a line of IC engines that will avail MPG gains that will blow away the competition; and right now, they do not have it, except perhaps that upcoming diesel for the Chevy Cruze. In the meantime, us traders will play GM via the support-resistance levels; at least they are known quantities.

LG's New EV Battery Plant Is a Welcome News for Tesla
Tesla Giga Berlin's New Hurdle: It's Not Only the Gov't, but Now Tesla Itself
END_OF_DOCUMENT_TOKEN_TO_BE_REPLACED