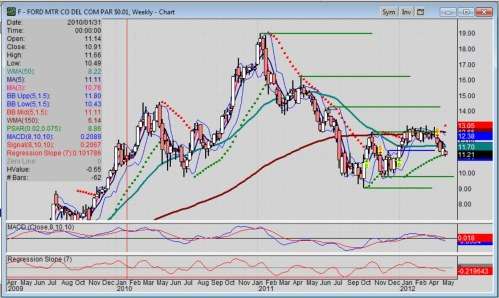 Ford Motor Company (NYSE: F) stock is challenging price support once again, despite its $1.4 billion first-quarter profit; and resistance is not that far above present price.
Advertisement

Look at 13.05 as resistance and 9.75 as the lower support levels for the weekly chart of Ford stock. Furthermore, that 9.75 level gets repeated as far back as 2010. Point is, the technicals that define the stock’s price dynamics this year do not lie. Ford’s stock pattern is far from bullish; in other words, it’s in a trading channel.

Look again, though, at that green line on the chart that represents the weighted 50-period moving average. There are three aspects here: one is the relative position of today’s price; the second is the slope of the average which is sideways to slightly up; the third is the WMA50's relation to the WMA150; meaning it is below it.

Now, you may favor other averages like the non-weighted MA150 or the MA200, especially on a daily chart. Point is, the longer you go out, the less you are apt to see a turnaround. The WMA50 is weighted for a reason. It weights the most recent data as more important; and thus a key indicator of price trend bias; and this bias for Ford stock is to the consolidation side; meaning, it is neither going up or down with any significance.

On the other hand, present price is below the weighted 150 period moving average (dark red). That is significant; and it is bearish, and should breed caution.

Be apprised, though, there is a downside limit; aside from zero, that level is 9.75. So, putting my probability hat on, I might be a buyer near that level; that is, if I believe in the mid-term to longer term for Ford. Another option is to literally sell some Ford put options to gain income until it gets to that level. Problem is, the volatility is not pushing premium up high enough or far out enough in strike prices to make it worthwhile.

Do not take this wrong. Ford is still a fine company, and has come along way. The stock just looks under the weather. Its cars look great; its technologies, especially its EcoBoost engines, are top notch. And while electrification is taking a hold on Ford as well, the company is not betting the farm either. Smart move in this writer’s eyes.

On the News Front

Ford stated last Friday that it will offer 90,000 of its retired engineers and office workers the option to accept a lump sum payment now and to forego their regular monthly pension checks for the rest of their lives. Ford would not dothis if it wasn't a drag.

Still, why the retirees would accept that boggles my mind, but Ford may be using the tactic that pension dumping is not out of the realm of possibility; as in the pensions could be turned over to the Guaranteed Trust of the US government. Who is to stop them? After all Ford did not take the baiilout; and is paying a hefty price by not dumping bond debt as GM and Chrysler.

Recall that retirees at Delphi Automotive, General Motors‘ former parts unit, saw their pensions reduced by the Pension Benefit Guaranty Corporation after the company went bankrupt in 2005. What Ford does not tell you is that only those with retirements above $40K per year may be subject to a lower amount. In other words, if their retirement check is higher, then it may be cut. How many are in that category? Check out the Pension Benefit Guaranty Corporation website for yourself for the guidelines, though. Of course, high-end engineers and executives would likely fall under that rule. However, is Ford planning on that really happening? Or is it merely a fear tactic?

The so-called voluntary pension buyout for U.S. salaried retirees and former employees is surely an effort by Ford to improve its balance sheet by reducing its massive $74 billion worldwide pension obligation. The company called it the largest pension buyout offer in history.

Ford said its U.S. pension obligation is about $49 billion, and the offer to salaried retirees represents about one-third of that obligation. That is significant. The remainder is owed to retired UAW workers.

Back to the Chart

Ford’s stock chart is neither good or bad. If you believe in Ford for the next few years, then perhaps this downdraft is an opportunity to buy. However, question always is: At what price should you buy? Nobody needs to pay retail when you might get shares at wholesale by simply being patient.

For the record, I do not own any Ford stock at present. I did in the past sell put options and made out quite well. So, I’ll check the options again, but will likely wait for a support level hit before I act. Yes, patience, not always my favorite suit, is in order and makes sense.