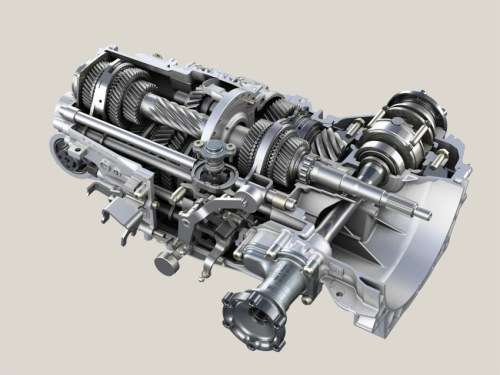 The seventh generation of the Porsche 911 Carrera/Carrera S was completely new in its development, and presented at last year's Frankfurt Motor Show. The road to success has already been paved with its new opposed cylinder engine at the rear; and now ZF's 7-speed manual transmission (7MT) will contribute even further to this success.

Thanks to ZF Friedrichshafen AG this new manual transmission with 7 gears is the first of its kind to be available for passenger cars; and the benefits are based on technology and robust design. According to the ZF news release, while the technology achievement spells fuel economy for the Porsche, it is the dual clutch design that is responsible for the new, fast gear shifting characteristics of the 911.

For those unfamiliar with dual clutch designs, be apprised the dual clutch system consists literally of two separate clutches. This allow two gears to be engaged at the same time. One of the gears is transferring torque, while the next is already pre-selected. The entire shifting process takes only a few tenths of a second, without any interruption of torque. A specially developed electronic control unit regulates the dual clutch transmission and the transmission actuation. It monitors all relevant parameters such as speed, rpm and transmission ratios, and adjusts shifting depending on the driving situation.

According to ZF, their dual clutch systems combine the comfort of an automatic transmission with the sporty handling of a manual transmission. The result is a faster, smoother acceleration and superb shifting dynamics.

In the case of the Porsche, fuel can now be saved with the additional 7th gear. Imagine that, a Porsche which conserves fuel due to its high gearing, thus a sporty cruising speed achieved at a low engine speed.

For the record, the transmission was designed based on the 7-speed dual clutch transmission (7DT) - which is also manufactured for Porsche - and offers excellent shifting comfort and sportive shifting forces. For this reason, the new 911 reaches its top speed already in the sixth gear. The seventh gear, however, has a high gearing and helps to save fuel.

Also the high efficiency and the optimized weight of the 7MT contribute to fuel efficiency. Furthermore, it is equipped as a standard with an automatic start-stop system

Like this, the classical H-type shift pattern could also be implemented with the dual clutch gearsets. At the same time, a patented system avoids incorrect gearshifts: The seventh gear, for instance, can only be engaged directly following the fifth or sixth gear.

Details highlighted by the news release included the following:

In addition, ZF delivers options for the Porsche 911 specific to the 7-speed dual clutch transmission, including lightweight pedals made of plastics as well as suspension bearings for damping vibrations. The ZF Servolectric electric power steering, for example, is delivered by ZF Lenksysteme.