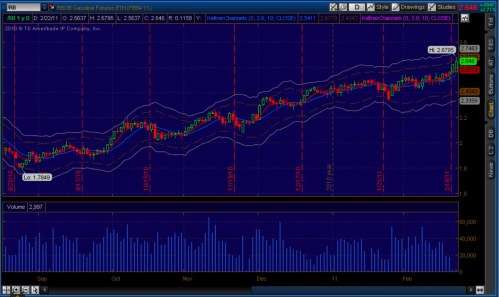 U.S. markets, including Nymex floor trading, may have been closed Monday for America’s Presidents Day holiday, but world tensions about Libya did not take any break and sent oil prices in the futures market spiking over $108 per barrel; and on its heels are gasoline prices.
Advertisement

All that talk about $5 per gallon for gasoline all of a sudden doesn’t seem so far fetched.

Fact is, political unrest in Libya raises concerns about possible disruptions in oil supplies; and that upsets the supply-demand balance.

Question is, how deep will this affect American driving, especially if fuel prices escalate at the pump in line with the Libyan tensions? After all, it’s not unusual for bad news to raise prices almost immediately, but take multiples of weeks or months to settle back down to pre-tension stage.

Libya is a major oil producer and a member of the Organization of Petroleum Exporting Countries. According to data from the U.S. Energy Information Administration, Libya also holds the largest proven oil reserves in Africa, followed by Nigeria and Algeria.

Citing Al Jazeera television, Reuters reported Monday that production at Libya’s Nafoora oilfield was halted. Of course, restrictions on foreign media make it difficult for the west to confirm these reports.

Is the U. S. at risk as it was in 1979? Not as much as Europe, according to interviews on CNBC and elsewhere; as several European energy firms have operations in Libya, including Italy’s ENI SpA and Austria’s OMV AG.

Fact is America now garners more oil from Canada’s oil sands and South America than ever in history; plus America is the largest holder of natural gas.

Looking at automotive technology, though, still has America in a bind. The government has placed most of its chips on the electric car with expensive lithium-ion batteries. Even the hybrids are still beyond the reach of many drivers.

What to do? Perhaps it’s time to reconsider making natural gas a primary fuel in America.

Think about it. We are already the Saudi Arabia of nat-gas. We already have a basic infrastructure in many homes, no less then we have electrical power.

If we want to stay with electrical power, that’s fine; but we need an immediate push toward ultra-high capacitors to enable cheaper versions of the electric.

In the meantime, how about advancing IC engine technologies like the Scuderi split cycle that has the ability to become an air hybrid.

See, America is not without ideas. Perhaps this latest tension in the world of oil is exactly what we need to get serious.

As far as gasoline prices and tyrading goes, just be apprised that present prcies were traded today on low volume. The moment of price truth, though, will be in the morning when trading in New York begins.