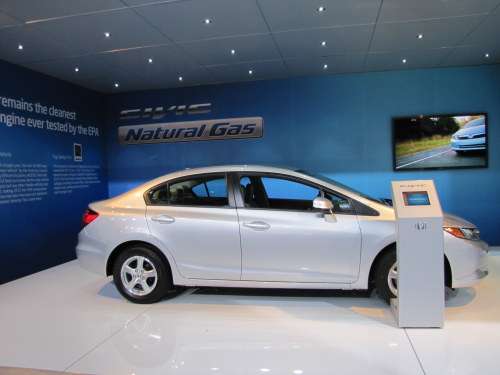 Despite NADA's recent opposition to the proposed 54.5 mpg standards by 2025, Chrysler-Fiat CEO Sergio Marchionne told the NADA convention in Las Vegas that the auto industry will still need to meet it; and can do so, including using natural-gas as a fuel.
Advertisement

While the majority of reporters concentrated and wrote on Marchionne's position relative to NADA's negative statements to the upcoming fuel mileage mandates, a few caught Marchionne's emphasis on CNG cars as part of the solution.

Fact is, we complain of high fuels costs and the expensive price tags of EVs and hybrids, while one alternate fuel is still waiting in the wings as a solution to lower our transportation costs - natural gas. We sometimes appear like starving children with a loaf of energy bread in each hand.

Good news is, many companies are now converting the commercial trucks to run on natural gas. This makes perfect sense as a first approach, considering the sheer volume of commercial vehicles like heavy trucks on the roads. Commercial trucks are not the only vehicles, though, that can benefit from this highly available fuel.

Speaking at the NADA convention in Las Vegas, Chrysler-Fiat CEO also touted his company's technology in developing compressed natural gas vehicles. For the record, Italy, the home of Fiat, uses natural gas for much of its cars; and Fiat is one of the main provider’s of vehicles that are designed to handle that fuel.

I have reported many times before how Sergio Marchionne believes natural gas engines are a better choice for cutting greenhouse gas emissions, because they are less expensive to produce and sell than other new technologies. It's hard to argue against the economics. Even the latest engine developments can account easily for nat-gas, like the Scuderi split cycle with air hybrid, and the Cyclone external combustion engine that will be making a run at the land speed record with a steam engine. Read: Fiat best poised to bring nat-gas vehicles to America and Fiat has tech savvy to lead America into natural-gas cars.

After his 30-minute keynote address before the NADA convention, Marchionne revealed even more as he told reporters, "I can make them faster than you can think, but you have to have people that are going to buy them." Marchionne also said. "We're going to start showing the product, and then we'll see if people are going to take them. I think it would be an interesting way to shift the reliance on foreign oil."

Marchioness said that commercial users would be a natural place for CNG vehicles to take hold in the United States. This agrees with the Energy Plan of T. Boone Pickens.

Right now, only Honda seems to have a non-commercial vehicle ready for the public to engage natural gas. See the photo from the 2012 NAIAS in Detroit.

Many comments here at TorqueNews do not like it when CNG is mentioned with any favor. They more often adhere to the philosophy that every drill for nat-gas somehow destroys groundwater. Fact is, injecting a high-pressure mix of water and chemicals deep beneath the ground to free up oil and gas deposits has been in use for more than 60 years. So, when U.S. President Barack Obama endorsed the practice in his state of the union address last month, he was not stepping out.

According to the Conoco Philips website, for example, the fluid is a mixture consisting of water, sand and a small amount of chemicals – some of which are found in common household items or even food products. Of course, an environmentalist would still challenge the dangers of the chemical makeup.

Still, hydraulic fracturing is a proven and well-regulated technology; 99.5% of fracking fluids are water and sand; and the industry is committed to the continued safe and responsible development of natural gas.

The fluid functions by penetrating the shale and creating cracks, or fractures, in the rock. The sand or ceramic particles, called proppant, being carried by the fluid are deposited in the narrow fractures, propping them open so gas can flow into the well.

The gas/fluid mixture is separated at the surface, and the fracturing fluid (also known as flow back water) is captured in steel tanks or lined pits. The fracturing fluids are then disposed of via government-approved methods.

On the other hand, environmentalists are saying the risks are higher than in conventional drilling. That includes everything from groundwater contamination to a pipeline leak. Furthermore, the equipment emits pollutants into the air (as if volcanos don‘t). Fracking fluid, once it returns to the surface, contains chemicals and naturally occurring hazardous materials.

Here is where I have to stop as a writer. Please note that in no way do I support illegal drilling or even dangerous drilling. However, when I read terms like “naturally occurring hazardous materials” being used to down a human extraction of an energy source, that catches my eye. It’s overplaying the information hand, in my opinion.

Of course naturally occurring hazardous materials exist in the ground. Visit near a volcano and smell the sulfur. The fact is, the earth’s surface is 4/5 water. So, that leaves a tremendous amount of area for the earth to naturally spew from its bowels, not to mention the most obvious - volcanoes. So, when I read environmental arguments, I like to keep those facts in mind.

Now, groundwater contamination is a serious issue. That is why I have a serious filter on my water sources, regardless of whether it is the city provided or from a well. The fact is, we have the technology to clean up water. And the areas for fracking are limited to mining and drilling areas. Anyone who drinks water from any mining facility is foolish, regardless of the commodity being mined or drilled.

Yet, that doesn’t mean that we should stop all drilling for the one energy source that has the potential to free us from foreign oil. Even electric cars will require the use of natural gas to power those utility turbines. Point is, we cannot have it both ways.

Furthermore, Marchionne’s company is in a great position to help.

Aaron Turpen wrote on February 5, 2012 - 10:04pm Permalink
I live where natural gas is abundant. We use it to heat our homes, it provides our electricity (and that of much of the neighboring state), and it heats our water. Among other things. Wind is also abundant here and most of us use it to our advantage when we can, though the 1.5GW of wind power commercially produced here is all sold (every electron) to California by way of Colorado rather than used here. I've heard that Ford will likely be making their consumer version (mini van-ized) of the Transit Connect available in CNG (as it is commercially), so that may be another option soon.
Phil L. wrote on February 7, 2012 - 10:11pm Permalink
Excessive cost? Are you measuring this by talking shareholder dollars or by lives lost due to environmental impacts of polluting this planet with outdated ICE designs? Only when Marchionne embraces Scuderi Engine Technology is he is to be taken seriously about moving the automotive industry to the next great age of innovation. I am so aggravated with the auto industries' painfully slow exploration of American innovation. I have had enough with the metered delivery of technology, even when a significant breakthrough design is at reach in the U.S. It is time NOW to invest in a solution that answer needs not filled in the last 30 years! Sometimes action for the greater good for the planet and its occupants is more honorable than purely monetary gains. In this case, all sides of the equation win. The Scuderi Engine provides wholesome power for performance enthusiasts, cleanest emissions for anyone who breathes, ultimate fuel efficiencies for financially strapped families (military budgets and alike) and the lowest retooling costs of ANY competing technology, so modern industries that adopt this technology won't have an excuse to say that this upgrade is too cumbersome to implement. It is time for leaders like Marchionne to put their money where their mouth is. Sure, the initial licensing costs may be daunting, but in short time the rewards will make it very worthwhile. Once the consumer realizes that there is better, they will demand better. Its time to think outside of the box!