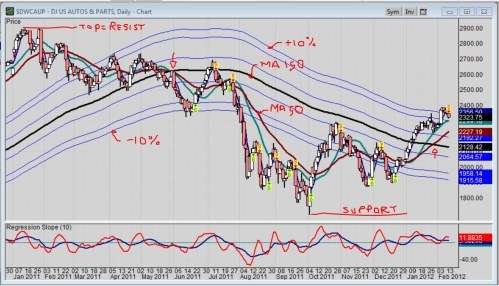 Mark Hulbert, founder of Hulbert Financial Digest, tracks more than 160 financial newsletters; and one of them involves Argus Research, which shows insiders selling at a ratio not seen since last summer’s sell-off. Should this be a cautionary note for auto sector stocks, too?
Advertisement

Insider selling is not a respecter or persons. When it hits the general market, it can transcend a specific sector and extend to other sectors with its negative effects. So, the follow-up question here is: Will insider selling this time around, which hints at a general market sell-off, drive auto sector stocks down, despite the strength and all the gains achieved in the past year? And how far might they fall?

Mark Hulbert, founder of Hulbert Financial Digest in Annandale, Va., has been tracking the advice of more than 160 financial newsletters since 1980. So, his access to information is much greater than the general public. In this he looks for trends and repeatability based on probability.

As a trader, I have great respect for Mr. Hulbert’s work. So, it should be no surprise that I might view this documented sell-off warning as a precursor, applicable to more than just the general market; more specifically to auto stocks. Point is, regardless of who is doing the selling, if it’s big enough, then all sectors can be affected.

Hulbert’s latest article for MarketWatch.com says corporate insiders are now selling their companies’ stock at a rate not seen since late last July. Why is this a concern? A late July, 2011 spike in selling came just days before a very painful two-week period. I remember it well. In fact, it was rated as severe by many.

Be apprised that watching corporate insiders is considered an important element of any robust analysis of fundamental-related stock news. The theory says that when corporate insiders, as in officers, directors and largest shareholders, buy or sell, it is based on the assumption that they know more about their firms’ prospects than do the rest of us. So, it is deemed bad news whenever they sell at such a heavy pace.

Technical analysts who follow price dynamics, assume the fundamentals are already baked in to the prices. So, question is, is this latest insider-selling information fully baked in to prices? Probably not, if the volume is high, which is why Hulbert is writing about it.

Moreover, when data such as insider selling is confirmed by a higher than average ratio of the number of shares sold in the open market compared to the number bought, that becomes alarming. Such seems to be the case with the latest ratio calculated by Argus Research and reported via their service, the Vickers Weekly Insider Report. According to Hulbert‘s article, this sell-to-buy ratio stood at 5.77-to-1. And among insiders at companies listed on the New York Stock Exchange, this ratio was even greater at 8.2-to-1.

Now, should you panic and look to sell shares, and stay in cash based on this information? That’s your choice, but know there is more than one way to handle a potential downturn; and panic should not be one of them. One way is to indeed go to cash. The other is to hedge your positions with put options. Think of put options in this case as you do insurance.

Another method is to sell upside call options for income on the stock you do own. However, that is more often a strategy for a sideways market, not a downturn.

Problem is, you never really know how long or how deep a downturn might go. That is simply the unknown nature of markets.

Look at the major automakers. From General Motors Company (NYSE: GM) to Ford Motor Company (NYSE: F) to Toyota Motors (ADR: TM), all have recovered since the 2008 economic debacle. Even Toyota, which suffered with Honda after the earthquake and tsunami, has been making high highs and higher lows with multiple gaps in price jumps. However, the bull wave of the $DWCAUP from the low in October, 2011 is right up against a major broken-resistance level from June, 2011.

Another fact is, no matter how good the fundamentals and the prognostications of analysts, all auto stocks rise and fall with the tide of the general market; some more, some less than others. A stock that does not move at all sticks out more often as a must-own stock. That includes suppliers as well as automotive OEMs.

In this case, the concept of a rare black swan event does not appear to apply, because black swan events are seldom seen or predicted; hence the rarity. This latest insider information, however, is already known; and, furthermore, has proven predictive power. It has been seen before; it has been accurate; albeit the exact day and time are never so convenient.

As we look at all auto stocks or the $DWCAUP, which represents anything and everything automotive in a single index-like entity, we see more than just an advancement in prices since October, 2011. In other words, the trend of the price dynamics has been coinciding with the bullish move that started with that major low back in March, 2009. However, the latest down-wave that started with the high in Jan. 2011 confirms the trend has been down via that crossover of the MA-50 below the MA-150, but it is a mature wave. So, attempting higher ground with that recent breakout of the 20-bar channel, and the MA-50 above the MA-150 says chnage is real to the upside

Problem is, insider selling that just so happens to coincide with a sector up against support as a channel high has to at least induce a little caution; and I cannot help but feel cautious at this point.

I have also been researching some technical tools to help me ascertain trend bias and potential changes in trend. That is why you see the Regression Slope lines today, the red is the 10-period; the blue is the 20-period. Truth is, too many tools are just as bad as too little. That sell bias from the downside breakout of the shorter MA-10 channel together with the downturn of the Regression Slope does not sit well with me to be too long in the market, even with that MA-50 crossover of the MA-150.

Furthermore, the MA-150 as used by Oppenheimer's Carter Worth on CNBC's Fast Money and Options Action intrigues me. Faster than the usual MA-200, it turns quicker; but my addition of a percentage envelope does provide an additional frame of reference as well as support-resistance.

Furthermore, resting at the top of the +/-10% MA-150 channel, the $DWCAUP displays a technicaly overbought position. All it needs is for some negative news, and down she might go; and this insider selling news should not be taken lightly. This is why I hold a few SPY put options for March as protection. Then again, that is merely a probability look, not a certainty.

Recoveries from major selloffs eventually end, though; as do every recession and every bubble. So, perhaps all this insider selling of late is merely the natural scheme of themes taking place; the pause that refreshes before the next bull run, so to speak. So, in the spirit of the Market Wizards book, it’s more important to know what you are going to do if and when the insider-selling prediction comes true.