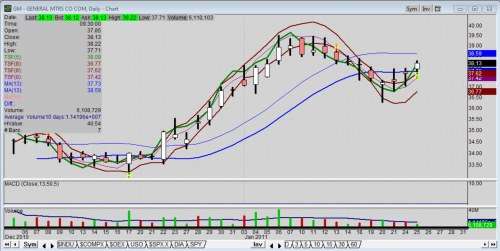 As of 1 p.m. GM stock traded as high as 38.22. Still, the stock is subject to the flows of the general market tides.

For the record, the third Friday of every month is the last trading day for option contracts assigned to expire. So, it was not unusual that GM and many automotive stocks sold off a bit.

Still, the U.S. dollar’s impact on other world currencies has a major affect on auto stocks. A falling dollar means it will cost automakers like GM more money to purchase raw materials.

The general market has also had a giant run since last September. Some investing gurus are cautioning against minor correction.

On the fundamental front, though, GM is still riding the wave from the 2011 North American International Auto Show in Detroit. The recent introduction of the Chevy Volt, the new Chevy Cruze and the Chevy Sonic were received quite well by the media and the visitors at the Detroit auto show.

From a technical chart perspective, price dynamics lead the way for interpretation. Note the price trend bias from the lower left date of December to the upper right: that’s still bullish despite the recent sell-off, where the latest cycle low and support is now at 36.27.

For the record, there have been no extreme volume days.

Investor’s are cautioned to watch the market action after the president speaks tonight, as energy talk can affect auto stocks.

Last week, I questioned at what price level will buyers come back in to GM during the option-week sell-off. While I noted support could be found as low as 35, the close of the Dec. 22nd breakout, it came at the 36.27 level; which still stands.