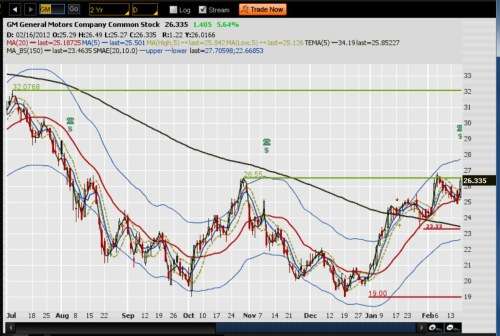 In its first full year as a public company, General Motors Company (NYSE: GM) reported growth in the top and bottom lines, advanced global market share and made strategic investments in brands around the world, but traders know the reaction via the stock’s price dynamics is what counts.
Advertisement

According to Dan Akerson, chairman and CEO, “We will build on these results as we bring more new cars, crossovers and trucks to market, and make GM a far more efficient global team. This includes reducing our break-even level in Europe and South America and driving higher revenues around the world.”

Nonetheless, the announcement came one day before February option expiration, which already has a pall effect on most stocks. So, it is difficult to tell at this time if the announcement’s effect is muted for that reason alone.

Fact is, the stock opened higher this morning at the NYSE at 25.29, up from Wednesday’s close of 24.93. Point is, if the news was that earth shattering, the move would have been much higher than the paltry 1.44% gain. However, the stock did reach an early morning high of 26.28 for a healthier 5.4 % spike. The stock then fell back under 26 during the first hour of trading.

In the minds of stock traders and investors, one rearward-looking statement is always worth noting. For the fourth quarter of 2011, automotive cash flow from operating activities was $1.2 billion, and automotive free cash flow was $(0.9) billion, which includes the previously announced $0.8 billion contribution to the Canadian Health Care Trust (HCT).

While GM believes any forward-looking judgments are reasonable, these statements by law are not guarantees of any events or financial results, and actual results may differ materially due to a variety of important factors. Nonetheless, the unfunded pension obligation is serious, which makes anyone wonder why there would ever be any increase in salaries or benefits until that issue is resolved. After all, if GM is trying to make its first year as a new company memorable, this is one area that stands out.

For the record, a letter went out via the GM Retiree Communications to existing retirees that existing benefits are not under consideration. From this writer’s perspective who just so happens to be a GM retiree, time will tell, though, if GM will fully fund the pension liabilities or it will dump the package on the government.

Nothing has really changed on a macro perspective. The lower support is still at 19.00 and 23.33; and the upper resistance still stands at 26.55, but has been tested and broken a few days ago at 26.83.

That is still far from its IPO opening of 35.00, which now stands as a target for which all GM stock trading will likely be measured from here on out. Before it ever gets there, though, GM stock will have to overcome resistance at that 32.00 area.