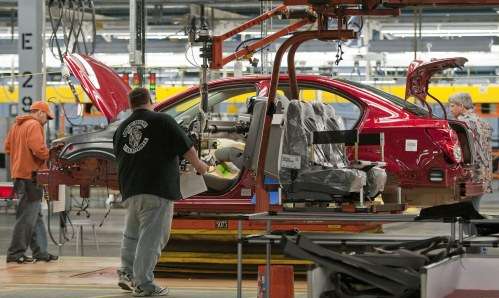 When production of the fuel-efficient 2012 Chevrolet Sonic and Buick Verano begin this fall, 40 percent of the energy to power the General Motors Orion Assembly Plant where they are built will come from burning landfill gas created nearby.
Advertisement

According to the General Motors (NYSE:GM, TSX: GMM) news release, the use of the landfill gas will save GM $1.1 million a year in energy costs. Furthermore, it cuts the amount of greenhouse gases, sulfur dioxide and nitrogen oxides released in the air.

During most of the year, the system run exclusively on landfill gas primarily to generate steam for heating and compressed air.

“Orion is a great example of the latest technologies employed by GM manufacturing around the globe,” said Eric Stevens, GM vice president of Global Manufacturing Engineering. “As we converted the facility to support the small car program, we took every opportunity to engineer in flexibility and lean manufacturing concepts.”

Use of landfill gas is just one of the sustainable methods that lessen the plant’s environmental impact. Others include:

1) Lighting system upgrades that saved more than 5,944 megawatts of electricity per year and $430,000 while also cutting CO2 by 3,676 metric tons. Plant workers track energy use on an hourly basis with sophisticated software, enabling them to see real-time usage by department to improve their equipment shut-down activities.

3) An upgraded paint shop is heated by natural and landfill gas, and uses half of the energy per vehicle of the one it replaced. Both the Sonic and Verano use a new eco paint that eliminates the need for a primer oven and increases quality and appearance due to waterborne base coats.

“With these improvements, we’ll reduce greenhouse gas production by about 80,000 metric tons at a full three-shift capacity,” Midgley said. “This is equivalent to the emissions from 14,000 vehicles per year, and the electricity reduction equals at the output from 3,500 homes.”

Orion also has embraced flexible manufacturing, allowing it to quickly respond to changes in customer preferences. Production lines were reworked, creating more space to house material onsite that once took up space in other buildings. This approach reduces the overall environmental impact of the plant’s material systems, but it also provides significant cost savings to the overall small car program.

For the record, two vehicles are scheduled to be built at the Orion plant this fall: The 2012 Chevrolet Sonic and the 2012 Buick Verano. They will be on sale by the end of the year.

The 2012 turbocharged Chevrolet Sonic is a small car available in five-door and sedan models, while the 2012 Buick Verano is a compact sedan, which includes 10 standard air bags, an available heated steering wheel and a next-generation radio system with OnStar-powered connectivity.