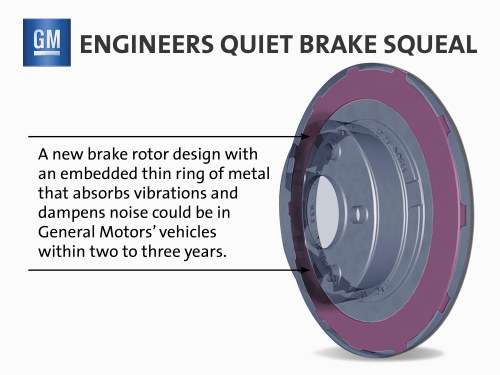 GM engineers design the squeal out of brakes

Just a few weeks ago we reported at TorqueNews on engineers from General Motors Company (NYSE: GM) doubling the life of brake rotors with metal treatment process used to treat power train parts. Well, a new design is now being developed by GM engineers in the form of an insert that practically eliminates unwanted brake squeal.
Advertisement

For car owners and automotive technicians alike, brake squeal has been a source of frustration since brakes were first invented. It’s best described as that screeching sound created by what may otherwise be a normally functioning brake.

As General Motors engineers are developing new technology that could practically eliminate the age-old problem, be apprised it will not be available for another two to three years. The metal treatment that extends brake life is, however, available now. Read: GM doubles brake-rotor life with Ferritic Nitro-Carburizing

The GM-patented design that negates squeal uses a thin ring of metal embedded in the brake rotor to absorb vibrations and mute the squeal. The design is called a Coulomb friction-damped disc brake after the friction-based damping mechanism associated with 18th century physicist Charles-Augustin de Coulomb.

The beauty of the Coulomb damped brake is that it allows the brake to simply do its job, said Jim Webster, GM engineering technical expert for rotors.

“When we design brakes, our goal is to make them an extension of the driver,” Webster said. “When the brake pedal is applied, the customer shouldn't have to worry about unwanted noises. The car should just stop or slow down within the distance that’s expected. The Coulomb damped brake allows the brake to perform quietly as a seamless part of the automobile.”

Automotive engineers have been dealing with brake squeal for 100 years. By nature, brakes are a major source of friction, which makes them a potentially significant source of noise. The unwanted noise in a brake is usually created when the brake pads are pressed against the flat face of the rotor to slow or stop the vehicle. The friction of the two surfaces leads to vibrations and noise.

With older brakes, the noise can be an indicator that the pads are getting thin and need to be replaced. But in many cases, especially with new brakes, the squeal is unpleasant but not an indicator of anything mechanically wrong with the system making them unsafe. In current brake systems, noises are minimized primarily through sound-absorbing materials in the brake pads, which can significantly reduce brake squeal but can wear down quickly.

The Coulomb damped brake attacks the problem from the largest noise-generating part of the brake system – the rotor. The rotor, though, is difficult to muffle because it has large unconstrained areas that are free to vibrate. In order to create the new brake, GM engineers developed a proprietary manufacturing process that sandwiches a metal ring inside the rotor.

A special coating for the insert prevents it from melding to the rest of the rotor during casting. This allows the insert to remain free to absorb vibrations and serve as a dampener. It’s like putting an object against a ringing bell.

“The Coulomb damped brake essentially creates a bell that doesn’t want to ring,” said Jim Schroth, a group manager in GM’s manufacturing systems research lab. “By absorbing the vibrations in the rotor with the special insert, we’re silencing the bell.”
In the short-run, the Coulomb damped brake could dramatically reduce the number of customer complaints with unwanted noise on otherwise normally operating brakes. The Coulomb damped brake would still alert drivers, possibly through electronic sensors, when the brake pads are worn and need to be replaced.

“The Coulomb damped brake creates new possibilities because we don’t have to worry as much about unwanted noise,” Webster said. “It could allow us to create smaller, lighter brake systems that provide even more stopping force than the larger brake systems in some automobiles today.”

Toyota's First EV Will Have a Name of BZ: Toyota BZ
First Videos From Inside The Boring Company's Las Vegas Loop
END_OF_DOCUMENT_TOKEN_TO_BE_REPLACED