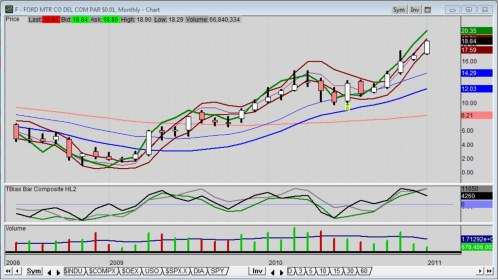 It’s no surprise that Detroit is getting mega media focus due to the 2011 Detroit Auto Show. Still, few knew Jim Cramer of CNBC’s Mad Money program would do his show as well from the Dearborn Truck Plant at the Ford Rouge Complex, home of the F-150.
Advertisement

One look at Ford’s stock and you will see the market agrees that the fundamentals of the company are strong. Furthermore, Ford Motor Company (NYSE:F) is slated fundamentally according to Jim Cramer to possibly double.

When asked about the comparison between Ford and GM, he noted that “GM is a hopeful turnaround, but Ford is a growth story.”

Cramer also said, “America works as an investment idea.” That means he is celebrating a resurgence in American manufacturing. And Ford was chosen for the show, not because of any failure, but for its gutsy play of not taking any government money and pulling itself up from its own boot straps. If it hadn’t, the show might have occurred somewhere else.

Alan Mulally, Ford CEO, was also on the show. The most notable thing mentioned was his daily reading of an advertisement placed in the Saturday Evening Post by its founder, Henry Ford. The ad stated that Ford envisioned “opening highways to all mankind.”

Keep in mind that up to that time, only the rich could afford to buy a car.

It seems that history may need to repeat itself. Once again, the cost of cars, especially the new electrics and hybrids are getting beyond the paychecks of too many Americans.

The auto industry may be on the road back, but far too many Americans still do not have work.

One other thing Mulally mentioned really stood out, though. It was also the Ford vision that automotive, especially global automotive manufacturing, is not a zero sum game. That means all can share in the wealth that auto manufacturing creates, labor and management.

Fact is, when automotive went down, Americans didn’t feel so rich. The connection appears symbiotic.

The monthly chart shows where Ford has been and likely to be going - up. It closed up today at 18.8 and enjoys a bullish trend bias since the intermediate low in late June of 2010.

Disclosure: Author of this article does not presently hold any stock or option positions in Ford.

Toyota's First EV Will Have a Name of BZ: Toyota BZ
First Videos From Inside The Boring Company's Las Vegas Loop
END_OF_DOCUMENT_TOKEN_TO_BE_REPLACED