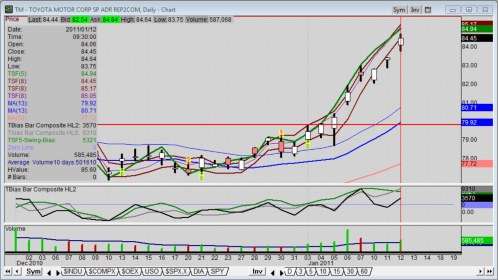 Even before the start of Press Days at the 2011 North American International Auto Show in Detroit, Toyota stock broke out of its sideways price channel.
Advertisement

It’s not unusual for auto stocks like Toyota, trading in New York as an ADR under the stock symbol TM, to enjoy price gains due to media coverage of its future products at the 2011 Detroit Auto Show.

After all, the stock market is a forward-looking mechanism. And so the breakout of the stock to higher levels started as early as Jan 6th on higher volume, the telltale indicator of breakout strength.

From a stock fundamentals perspective, Toyota has a lot of cash, despite the legal issues with litigation for accelerator claims. Furthermore, Toyota enjoys plenty of notoriety with its Prius Hybrid, just in time for the 2011 Detroit Auto Show and outside talk of possible $5 gasoline.

At the same time, 2011 NAIAS shows Toyota also wants to do more, like extending marketability of Prius technology, and by expanding the vehicle’s length with the new V, plus showing a sportier C concept. From a stock investor’s paradigm, this is indeed the expansion of the platform’s marketability, a strong fundamental picture from which to buy any stock.

For sure, much has been written and said about the choice of technology for the Prius. Fact is, Toyota came late to the PHEV or plug-in version for the electrification of the automobile. Nonetheless, Toyota is onboard.

Yet, according the new models on display in Detroit, the bright-blue Prius C concept tells the world a slightly different look is also achievable, which will expand marketability. Furthermore, it’s all under the same technical format that has made the Prius brand acceptable by the public. Electric and hybrids are not dull by any measure.

Still, some may prefer a larger car, while others want something sportier. Enter the Prius V, which gains 50% in cargo volume by an extended body configuration. While that is significant, so is the extra weight to the tune of 300 pounds. The convenience and need for space that the customers have been demanding trumps that, though; and Toyota has obviously listened; and the hybrid drive can handle it.

Bottom line for the V is that the hybrid format is now proven to be scalable. And that fact means Toyota is expanding the marketability of its Prius line of cars.

From a survey of the stock price dynamics, TM has confirmed its breakout. Will it return to the highs of just a few years ago? Difficult to predict. For now, though, TM closed up at 84.45. Its breakout level which now becomes future support is now 79.81 and 81.08, the open of the latest high-volume day; which also gapped up from its previous day's close.

Full Disclosure: The author for this article does not hold any stock or option positions with Toyota.