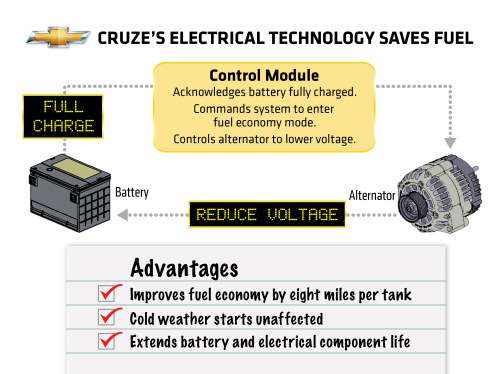 Regulated Voltage Control or RVC improves fuel economy on the Chevrolet Cruze by up to 1.5 percent, and enables the vehicle to get more than eight additional miles of driving range on every tank of fuel.
Advertisement

RVC is one of several small steps in a long journey toward better overall fuel savings for GM and Chevrolet.

Officially, the technology called Regulated Voltage Control (RVC) is patented by General Motors, and shows the company focusing on a system approach to fuel economy for the Chevrolet Cruze. RVC technology reduces the energy consumed by the alternator to help make the engine run more efficiently.

“Engineers left no stone unturned when it came to implementing fuel saving technologies on the Cruze,” said Doug Dickson, an electrical engineering specialist with the GM Global Energy Center. “Fuel economy is becoming a greater factor in purchasing decisions.”

Fact is, when the battery is in a high state of charge, regulated voltage control extends to supplying some of the power to handle the load created by vehicle electronics, such as the radio. The sharing further reduces the electrical demands on the alternator and the engine helping to gain further engine efficiencies.

When the battery charge drops below a pre-determined level, the alternator automatically knows to route the necessary voltage to recharge the battery. This regenerative recharging automatically occurs when the vehicle is decelerating. So even though the battery is handling more of the vehicle’s electrical load, it will remain at a high state of charge.

Buick has been making headlines with its eAssist technology, which allows regenerative braking to recharge a small lithium-ion batter pack which further supports the electrical system when the cylinders or the entire engine is shut down.

This RVC technology for the Chevrolet Cruze is one level of tech below eAssist, but no less significant toward contributing to the improvement in gas mileage. It is also much cheaper, but contribute s to the whole.

-----------------------
About the Author: After 39 years in the auto industry as a design engineer, Frank Sherosky now trades stocks and writes articles, books and ebooks via authorfrank.com, but may be contacted here by email: [email protected]News.com