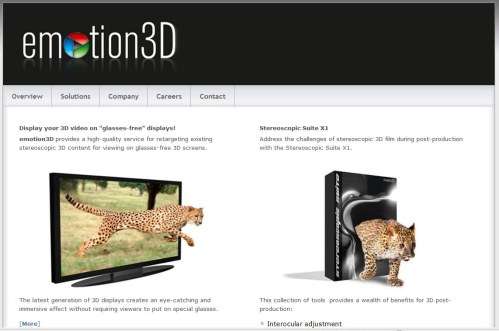 emotion3D provides BMW with a high-quality service for retargeting existing stereoscopic 3D content for viewing on glasses-free 3D screens. The BMW X3 is the first automotive commercial to use the technology.
Advertisement

emotion3d, a Viennese start-up in Austria, won the tender for the prestigious BMW deal with an efficient software solution for editing 3D films.

3D commercials is now added as one of many next waves in automotive marketing and communication.

Using the software solution, BMW literally enabled emotion3D to land its first commercial success by editing its new commercial for the BMW X3.

At the core is a powerful software engine that automatically generates depth maps from stereo 3D material. Content creators can then edit in the 3rd dimension and render virtual cameras.

2. Finishing for target display: Re-render your shot content with the correct perspectives.

3. "Fix it in post": Adjust interocular and convergence independently.

4. Depth keying: Use powerful depth-based segmentation in your post.

The 3D commercial will be shown by BMW at numerous car dealerships around the world and in a few selected showrooms in auto stereoscopy. This is the generic name for three-dimensional imaging technology that negates the use of special glasses and similar headgear.

Question is, will this start a new trend in automotive marketing?

emotion3D edited the BMW X3 commercial in a highly qualitative, inexpensive and efficient way, creating these 3D displays. As a result, viewers are taken into a new, groundbreaking dimension of 3D entertainment and are offered a variety of different perspectives.

emotion3D has been funded and supported by INiTS Universitäres Gründerservice Wien GmbH. This consulting service of the Centre for Innovation and Technology of the City of Vienna, the University of Vienna and the Vienna University of Technology supports and advises graduates, employees and students at universities and universities of applied sciences on putting their business ideas into practice and founding start-ups.