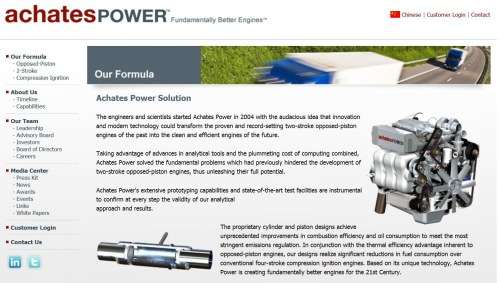 The results demonstrate a 20 percent improvement in fuel efficiency when compared to a recently introduced, award-winning, state-of-the-art, four-stroke diesel engine.

Recall that this is the same company that Torque News interviewed in August in Traverse City at the CAR MBS 2011 conference. Read: Achates Power addresses commercial truck mileage and emission standards

Brake thermal efficiency of 45.1 percent has also been demonstrated at the best engine operating point with an overall calibration that meets the stringent U.S. EPA 2010 emissions standard.

“Achates Power’s published technical results are demonstrated and validated from dynamometer tests of running engines, and have been validated by numerous third-party, independent sources,” said David Johnson, CEO, Achates Power. “No other independent engine developer has matched this level of reported data and results. As commercial and passenger vehicle manufacturers continue to seek improved fuel economy, our data speaks for itself and sets Achates Power apart in the market as a key player in the future of clean, efficient and cost-effective vehicle transportation.”

As Confirmed by Dynamometer Testing

The Achates Power opposed-piston architecture with the two-stroke cycle has improved brake thermal efficiency resulting from a combination of the following four effects:

1) Reduced heat transfer due to the more favorable combustion chamber area/volume ratio of the opposed-piston architecture;
2) Increased ratio of specific heats due to the leaner operating conditions of the two-stroke cycle;
3) Decreased combustion duration achievable within maximum pressure rise rate limits due to the more rapid expansion of the in-cylinder volume-per-crank degree angle; and
4) Reduced pumping work as only a portion of the residual gases in the cylinder need to be scavenged at each cycle.

The thermodynamic rationale for these results is documented in the SAE International Paper 2011-01-2216, presented at SAE ComVEC on Sept. 14, 2011. The most recent 20 percent fuel efficiency improvement is from ongoing enhancements, including the latest hardware upgrades and calibration improvements and more than 2,500 hours of testing at the company’s San Diego facility.

When compared to the published performance data of one of the best medium-duty clean diesel engines in the world, the Achates Power engine demonstrates:

“Achates Power employs industry-standard instrumentation and methods to benchmark its engines at multiple engine load and speed points representative of regulatory test cycles,” he said. “The single-cylinder results are then carefully extrapolated to expected multi-cylinder results using a rigorous interface model. These are real-world numbers. The outstanding fuel economy and emissions it reports are a testimony to the effectiveness of the fundamental research and development work I have seen at its San Diego facility.”

“Through the application of rigorous science and engineering methods, Achates Power has overcome historical two-stroke engine challenges,” said Dr. David Foster (Ph.D., MIT), a professor of mechanical engineering at the University of Wisconsin-Madison, an Achates Power technical advisory board (TAB) member, and an expert in the field of internal combustion and fluid dynamics. “Achates Power uses sophisticated models and powerful computers to analytically solve the complex combustion processes of the opposed-piston, two-stroke cycle.”

Achates Power has built state-of-the-art laboratory facilities utilizing leading-edge testing, simulation and analysis tools; developed more than 1,000 patentable innovations; demonstrated the superior performance of its engines; and garnered the attention of top manufacturers around the world. The company has a highly-regarded TAB that includes National Academy of Engineering members and SAE Fellows with more than 200 years of combined experience.

Achates Power was founded in 2004 by Dr. James Lemke, a serial entrepreneur and influential physicist who has more than 100 patents. The initial came investment from the late John Walton, son of Sam Walton, the founder of Wal-Mart.

Achates Power (www.achatespower.com) is based in San Diego where it has more than 40 in-house engineers and scientists with proven technical know-how and expertise, coupled with the industry’s leading-edge testing, simulation and analysis tools. Achates Power has also received widespread recognition from groups such as Business Week, AlwaysOn, The Guardian and Cleantech Group for its leadership in the Clean Tech sector.

Toyota vs Tesla: Which Stock To Buy These Days
For Some Former Daimler Managers Daimler Is Authority, While Tesla Is Like a Startup
END_OF_DOCUMENT_TOKEN_TO_BE_REPLACED