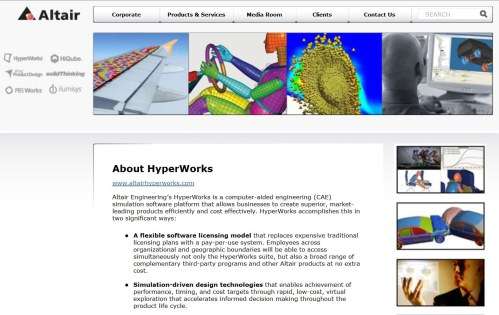 The interview revealed why Altair Engineering was chosen to participate at the 2011 CAR Management Business Seminars’ World Class Manufacturing segment. Based in Troy, Michigan, Altair is a global provider of simulation technology and engineering services to automakers and suppliers alike.

And if you recognize HyperMesh software, then you have met one of Altair’s early products often used by automakers. Now, products and companies include, HyperWorkds, PBS Works, Altair Product Design, Hi Qube, Inc, solidThinking and ilumisys, Inc.

HyperWorks simulation, in particular, provides a solution for rapid design exploration, and is one of the engineering industry’s most popular computer-aided (CAE) software suites serving major OEMs in a broad range of sectors, including automakers, aero, defense and heavy industries.

According to its website, Altair.com , Altair empowers client innovation and decision-making through technology that optimizes the analysis, management and visualization of business and engineering information.

When I specifically asked Mr. Brennan how Altair viewed itself relative to the automakers as well as suppliers in the industry, he replied that it was both a service and consulting organization; and that its software and consulting skills made it the largest computer analysis (CA) company in the world, with 50-plus automotive clients by 2010.

He especially noted how Altair contributes to helping automakers and suppliers develop the right shape of a part or system early on. In fact, his words of choice were, “structural optimization for weight reduction.”

This, of course, played right into the seminars that I attended, like World Class Manufacturing as well as Advanced Powertrains by automakers which especially depends on weight reduction.

Committed to an open-systems philosophy, Altair HyperWorks, for example, continues to lead the industry with the broadest interoperability to commercial CAD and CAE solutions in the PLM market space.

Brennan noted Altair’s flexible software licensing model that replaces expensive traditional licensing plans to automakers and suppliers with a pay-per-use system. Employees across organizational and geographic boundaries will be able to access simultaneously not only the HyperWorks suite, but also a broad range of complementary third-party programs and other Altair products at no extra cost.

His view is, simulation-driven design technologies enables automakers and suppliers to achieve of performance, timing, and cost targets through rapid, low-cost, virtual exploration. The goal is to facilitate and accelerate informed decision making throughout the product life cycle.

I was intrigued by the sample simulation that Brennan showed me on his laptop that first showed a volume for a vehicle frame. Then the software used that volume along with a set of performance expectations as criteria to create an ideal or “right shape” frame structure. Here is the video courtesy of Altair Engineering.

This was the closest I have ever witnessed where a design could be produced by the press of a button. Trust me, many automakers, especially executives and managers, actually thought CAD/CAE would do just that when they first purchased their CAD systems. Fact is, in automotive design, it’s not that simple. Vehicle integration, for example, demands tradeoffs that computers simply cannot make; at least at this point in time.

Still, having worked in vehicle architecture and development, I found this capability of Altair just awesome, as I could see it cutting development time significantly.

For the record, it is that first blank-sheet effort that often involves hundreds of hours of trial, error and testing to find the right shape for structural performance. With Alair’s software, those hours can be significantly reduced for automakers with full faith that the first shape is truly the ideal.

Other software options provides the ability to simulate full-vehicle impact upon crash situations.

I found Mr. Brennan quite relaxed, especially after I assured him that I was not the usual media type; and that, having worked with many automakers as well as in design and development, I held an understanding and deep respect for simulation power.

Still, he checked the Torque News site out, and wanted to understand just how we fit into reporting at CAR. I would have done the same.

He was especially proud of Altair’s success and represented well just how far the company had grown from its early days. He noted an acquisition of RADIOSS, a crash simulation software company which will contribute even further to its repertoire of functioning with high performance computing (HPC).

According to the company’s web profile, Altair is privately held with more than 1,300 employees, with offices throughout North America, South America, Europe and Asia/Pacific.

It has a 20-year-plus track record for product design, advanced engineering software, on-demand computing technologies and enterprise analytics solutions, and consistently delivers a competitive advantage to more than 3,000 customers in a broad range of industries; meaning, Altair’s relation with automakers is simply one aspect.