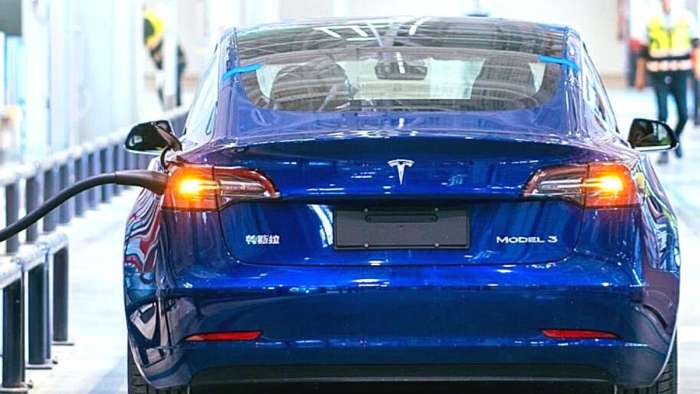 According to news coming out of China, Tesla plans to start shipment of Model 3s made in its Shanghai Gigafactory to some Asian countries including Singapore, Australia and New Zealand as well as to some countries in the European continent.
Advertisement

According to posts circulating on Chinese social media and tweeted by Ray4Tesla, who has been leaking good insights from Tesla China, Tesla is planning to ship Model 3s made in its Shanghai Gigafactory outside of china. This news has also been confirmed by Bloomberg citing unnamed sources.

The made-in-China Model 3s will ship to some Asian countries including Singapore, Australia & New Zealand as well as to some countries in the European market. Production of the export only Model 3s is slated to begin in the fourth quarter of 2020 and shipment to the markets is expected to follow shortly thereafter.

A rumor just popped up on Chinese social media that MIC Model 3s will likely be shipped to some Asian countries including Singapore, Australia & New Zealand as well European market. Production for export-only Model 3s will start in Q4. Shipment is likely to occur at EOY or early 2021. pic.twitter.com/C8Sw6b2XL3

If true, the announcement should be exciting to reservation holders in some of these countries who in times had to wait for more than 6 months for their cars to be delivered. This is the case because Tesla builds right hand drive cars in batches and there could be months in between two batches of right hand drive cars builds.

As of writing of this article it’s not yet clear whether Tesla plans to use the same Lithium- Iron-Phosphate(LFP) battery cells, supplied by CATL, it uses for its Chinese Model 3s in the cars it will ship to the other countries. If this is the case, this will mean the range of the Model 3s going to these markets will be slightly lower than the current ones shipped from Fremont, California. But this also could mean the cars should cost less for Tesla to manufacture. Whether Tesla will use the saving to increase its margins or pass the savings to its customers is yet to be determined.

Also of note is all the countries named in the leak are right hand drive countries. Which could mean Tesla might be planning to move manufacturing of right hand drive Model 3s out of its Fremont factory in California. This would make sense given CEO Elon Musk’s obsession in recent times to streamline the factory for automation and ease of manufacturability.

Tesla currently produces over 4000 Model 3s a week at its Shanghai Gigafactory giving it a run rate of 200,000 cars per year which will be enough to supply the Chinese market in addition to the shipments to the other countries in Asia and Europe. Tesla is also going full force on its Berlin Gigafactory finishing installing the roof in some sections of the factory which is expected to produce the Model Y initially.

What do you think Torque News friends? Let's discuss Tesla's MIC Model 3 exports from Giga Shanghai in the comments section below and also see my previous story comparing Plaid Model S to Lucid Air in terms of specs.