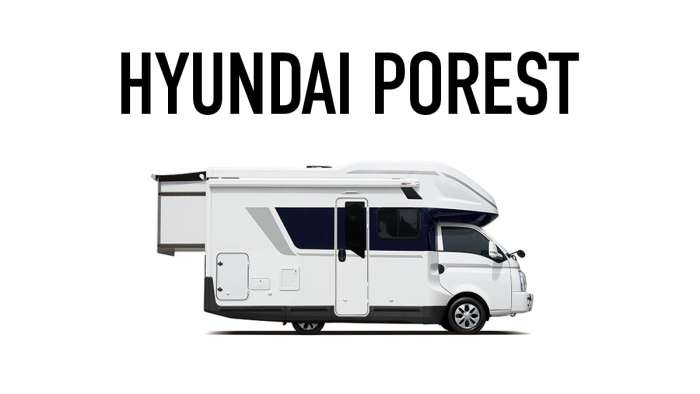 Hyundai Porest – A Campervan With a Funny Name

Hyundai has a new campervan for the Korean market. With the way the world is going, I can see campervans becoming a popular choice over rental cars because some may find it uncomfortable staying in a hotel. Because of this, we may see something like the Hyundai Porest hit the States.
Advertisement

If you love Hyundai, then you probably watched Charlie with Asian Petrolhead on YouTube. He reviewed the Hyundai Porest in great detail, which is where I got most of my information from for this article, so check it out below. And I understand this vehicle is not available in the States, but I find this campervan RV thing significant. Also, the name is just hysterical.

What Does Hyundai Porest Mean?

So, let’s talk about that ridiculous name first. In Korea, the name is not so funny because the Porest is based on the cab-over truck Porter, a work truck in Korea. So, Hyundai decided to merge the Porter name with the term “rest” to create “Porest.” It also rhymes with forest, so there’s that, but let’s be honest, a name change will have to occur if Hyundai decides to ship this to the States as no one wants to be associated with the term “poorest.”

I like the size of the Hyundai Porter as it comes in at 223” long and about 83” wide. For context, a Mercedes S Class is about 206” long, so this is something most people can drive. Just be cautious of underground parking garages as the Hyundai Porest is 115” tall. Overall, the Porest looks decent and pretty modern if I may add. 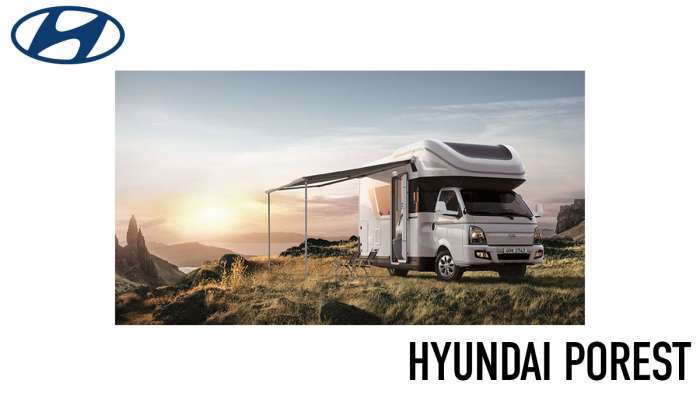 Since the Porest is a cab-over truck, the engine sits under the passenger seat, and the vehicle uses a 2.5l diesel engine producing 133 HP and 191 LB. FT. of torque. This motor is mated to a 5-speed automatic and is rear-wheel driven. This RV will be one of the slowest modern-day automobiles on the road, but hey, you can live in it.

The Porest is not available in the United States, but if we were to convert the pricing to dollars, the Porest starts at about $41,000. You have additional trims available, which brings the price up to $53,000 for a mid-trim model and an eye-watering $72,000 for the top trim. Can’t be poor to get the top trim, I suppose.

According to Asian Petrolhead, driving the Porest is rather easy once you get used to it. Expect wind noise and road noise, of course. Handling won’t be tremendous as the Porest has a high center of gravity. The Porest gets fitted with 15” wheels and 195 wide tires, which is comical. But, driving long distances will be comfortable and relatively stable at highway speeds, according to Asian Petrolhead’s review.

The interior of the Porest, starting with the front, looks surprisingly like a regular Hyundai passenger car interior, which is quite refined. The Porest even comes with a few safety features like lane-keep assistance and forward collision assistance, so brakes will be applied if the vehicle detects that you will rear-end the car in front. Despite the rear visibility getting blocked off due to the RV set up in the back, the Porest does not come with a backup camera. You only get rear parking sensors, which I suppose is better than nothing. 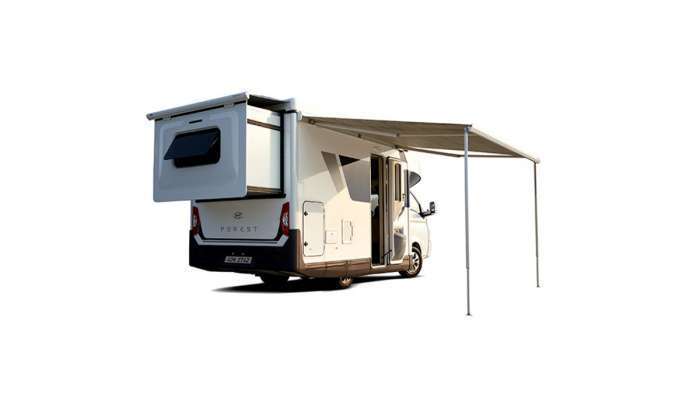 Before talking about the interior living space, some smart exterior cues need to get addressed. There is a storage location on the passenger side of the Porest, as well as a showering system that offers hot and cold water. When you look at the entry door, you find a trash can, so every square inch of the Porest is thought through to be useful and practical.

Despite the petite stature of the Porest, you still get all the living amenities you would expect out of a campervan. You get a small stainless-steel kitchen with a faucet and locking drawers, so they don’t fly out when driving. Of course, you get a fridge and a microwave built into the vehicle, integrated well with the kitchen. A small shower with a toilet is combined and is well packaged not to take up much space.

Speaking of space, Charlie is 6’ 2” and has no troubles fitting in any of the beds of the Porest. He can also stand up straight inside the vehicle without any issues. There is a “smart room,” which extends out from the outside by pressing and holding a button to physically extend over 30” to make more room for the bed. We also see fans and air conditioning installed in this area as well. You can also rearrange the seats in the interior to recreate beds, tables, etc. The interior design is brilliant, considering the space is limited. 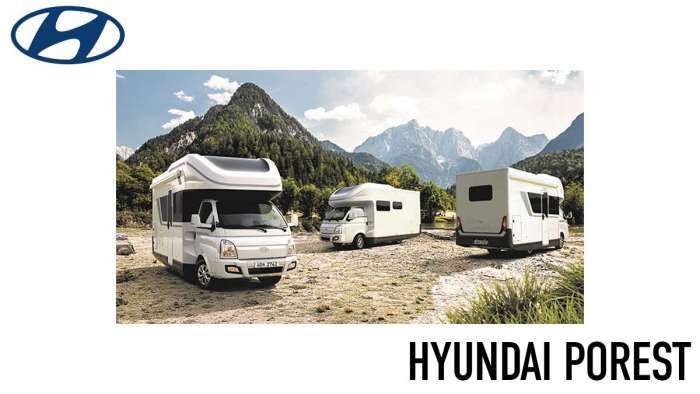 So why be interested in a vehicle that isn’t even available in the States? Its got a funny name for one, so it would be interesting to see what would happen if Hyundai decided to bring this thing over with that name. But more importantly, with all that is going on in the world, people might be afraid to rent traditional cars to stay in a hotel for trips. Hyundai may find it financially feasible to sell campervans in the States as an alternative to the regular rental car. Being the pragmatist king of both practicality and price, I can see the Porest being successful for trips with the family. Just change that stupid name.

Steveo wrote on August 7, 2020 - 5:21am Permalink
"because some may find it uncomfortable staying in a hotel" ..... I'd be more uncomfortable in a the small confines of a rental for car weeks with other people's evaporated breath all over and "in" the interior
Kevin wrote on August 7, 2020 - 2:04pm Permalink
You do know what's going on in the world right? Maybe you saw the news lately I don't know. We're not talking about your physical comfort, people are afraid of catching Covid. But you won't get any updates on cartoon network
ronnie M wrote on August 11, 2020 - 8:24pm Permalink
is there a date set for this camper car to be sold in the united states?
Judy Meehan wrote on September 9, 2020 - 2:59pm Permalink
Am very interested in purchasing.
George S Malakas wrote on August 25, 2020 - 3:18pm Permalink
Yes, big market in US for RV Hyundai reputation and price point make this a risk worth taking Hyundai! please big it!!
Don Griffiths wrote on November 11, 2020 - 12:09pm Permalink
Please send info booklet and when may be available in US or Canada.....looks like a great RV and I hope it becomes available to all
LaVerne Downer wrote on November 21, 2020 - 12:27pm Permalink
I’m a senior citizen, woman of color with no children. During this time I’m extremely alone. The Hyundai Porest would allow me to enjoy everything America has to offer. Please help
Algerd Monstavicius wrote on November 27, 2020 - 6:36pm Permalink
17 inch wheels and 4 wheel drive would help US sales.Turbo charge engine for added hp.
Dan Zamorski wrote on December 14, 2020 - 6:18am Permalink
It certainly looks like it hits on all cylinders. I can't wait to actually see and buy one. Don't take too long deciding on this, Hyundai !
Mara wrote on February 1, 2021 - 2:43pm Permalink
Are there any plans to bring this purest RV to the United States ?
Bao wrote on February 3, 2021 - 3:33pm Permalink
Please give advice when this is available in US or Canada?
Tobias wrote on October 7, 2021 - 9:31am Permalink
It’s currently available in my dealership outlet in Sacramento kindly send a text via my business watapp 8722192020
Danny wrote on June 23, 2021 - 4:32am Permalink
What is fuel mileage? For crying out loud!
Danny Enlow wrote on June 23, 2021 - 4:38am Permalink
What is expected fuel mileage?
Steve wrote on November 6, 2021 - 2:57pm Permalink
I wish Hyundai porest camper would come to the US, you would put a lot of companies rethink how they do business. I would buy one.$40,000 to $50,0000 is reasonable as long as the quality is there.
Harry mcgee chr... wrote on January 12, 2022 - 11:16am Permalink
Interested in buying
clemente ortiz wrote on March 8, 2022 - 9:15pm Permalink
Hyundai H100 or Hyundai Porter. any place in United state this rv can be purchase
jen wrote on April 10, 2022 - 1:44am Permalink
Having spent 20+ years in automotive marketing for every brand, literally EVERY BRAND, I am sooooo super stoked for this 'camper'. I would buy it for my own personal use. PLEASE update me with marketing brochures and ride and drives & static placements that I could view and purchase. Thank you and you are a GREAT brand. Tesla and Hyundai are currently in my driveway. Love ya!!!!
Steven wrote on July 13, 2022 - 2:26am Permalink
I'm interested buy one.