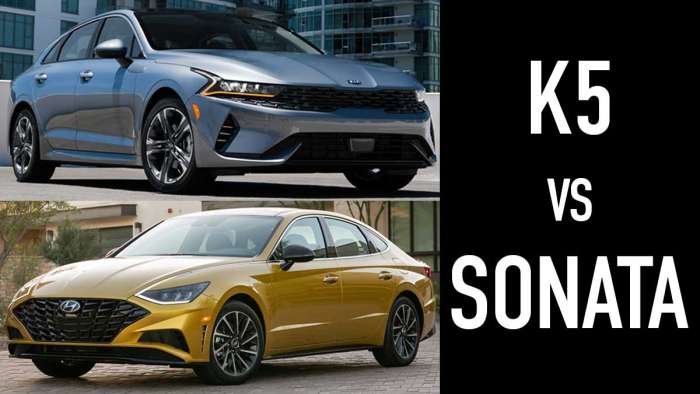 I recently reviewed both the 2021 Kia K5 GT-Line as well as the 2020 Hyundai Sonata Limited Hybrid. Here are my thoughts comparing the two.
Advertisement

Both the Kia K5 and Hyundai Sonata are all-new for their respective model years. The two cars are mostly the same, built on the N3 platform. Unfortunately, I couldn't quite compare apples to apples because the K5 I drove was a turbo 1.6l four-cylinder GT-Line (180 HP & 195 LB. FT. of torque) and the Hyundai Sonata was a fully loaded Hybrid with a solar roof (192 HP & undisclosed torque). Regardless, I was able to spot some changes with the two aside from the obvious.

Kia is usually the dynamic twin to Hyundai, but surprisingly, the Hyundai had a slightly more engaging chassis. Despite the Sonata Hybrid weighing nearly 400 pounds more than the K5 at 3500 pounds, the Sonata felt slightly more sure-footed. But neither of these vehicles can touch the 10th generation Honda Accord or Mazda 6 in terms of driving dynamics. What the Korean twins do better than any other vehicle in the class is lower your blood pressure.

This statement is especially true for the Kia K5. It rode even softer and was quieter than the Hyundai Sonata hybrid. This phenomenon is shocking because the Sonata is usually the comfy and quiet twin to Kia. The Sonata is still supremely comfortable but, the K5 has a luxury-like ride. The wind noise coming from the front at speed was the Sonata Hybrid's biggest downfall. Hyundai uses a cheaper windshield, and owners of the Palisade have filed a lawsuit against Hyundai because the windshields will easily chip/crack. The K5 gets fitted with acoustic glass, and Kia took extra measures to make the K5 as refined as possible. Again, both are quiet and serene, but the K5 edges out the Sonata.

I can't compare the power department accurately as both use a vastly different powerplant system, but they pull similar. Both vehicles give you the thrust upfront, and in the higher RPMs will begin to bottom out due to the lack of horsepower. This behavior is typical for turbocharged motors in this class and hybrids in general. Most should be satisfied enough; the vehicles feel effortless for city street driving; this up top power deficiency is only noticeable on the highway. 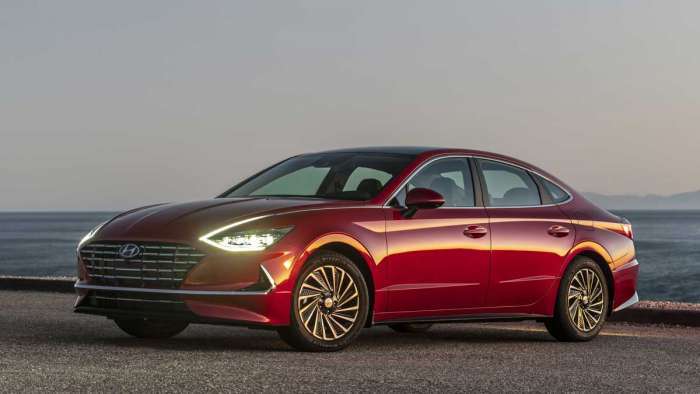 Now, Kia is supposed to come out with a 2.5l turbo engine producing 290 HP and 311 LB. FT. of torque capable of doing 0-60 in 5.8 seconds. I'm not very interested in this model because it will most likely not have a limited-slip differential, so it will just torque steer everywhere. The 1.6l engine is the perfect amount of power for this chassis, and most importantly, you can get AWD as an option with the 1.6l but not the 2.5l. The Sonata and K5 begin to show differences because the Sonata is FWD only for the time being no matter what engine you get. But the Sonata is offering a naturally aspirated 2.5l four-cylinder producing 191 HP and 181 torque. The K5 does not provide an NA motor or a hybrid as of now. 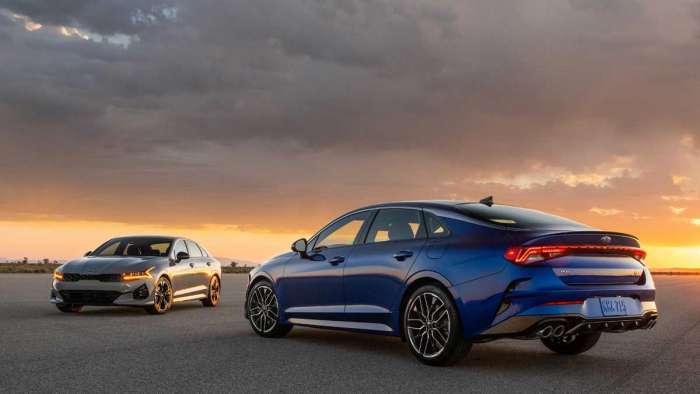 The interior also shares differences. If you like tech and all the latest, the Sonata might be the better choice for you. The Sonata offers a fully digital gauge cluster along with the optional 10.25" infotainment screen in the Limited trim Sonata. The 2021 Kia K5 does not get the 12.3" digital gauge cluster not even in the top trims, but the optional 10.25" infotainment screen is available on the K5. I liked the simplistic layout of the K5 more. All the digital screens in the Hyundai made it harder to digest. Again, I tested the fully-loaded Limited; you can get the traditional gauge cluster and 8" infotainment in the Sonata in the lower trims. 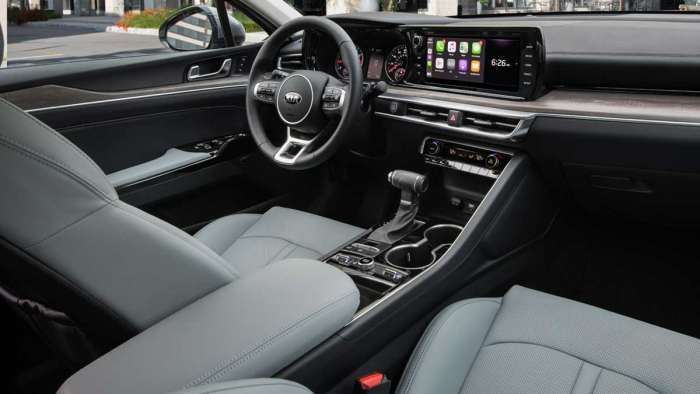 This setup is what I had in the GT-Line K5, along with a traditional gear level similar to the Kia Stinger. The K5 also has a ventilated higher speed wireless charger along with wireless Apple CarPlay and Android Auto. The Sonata still comes with Apple Carplay and Android Auto even in the smaller infotainment option. The most significant difference between the K5 and the Sonata is in the rear seats. The K5 offers far more space for rear occupants than the Sonata, almost as large as the new Accord. The trunk is about the same for both and is plentiful with a spare tire. 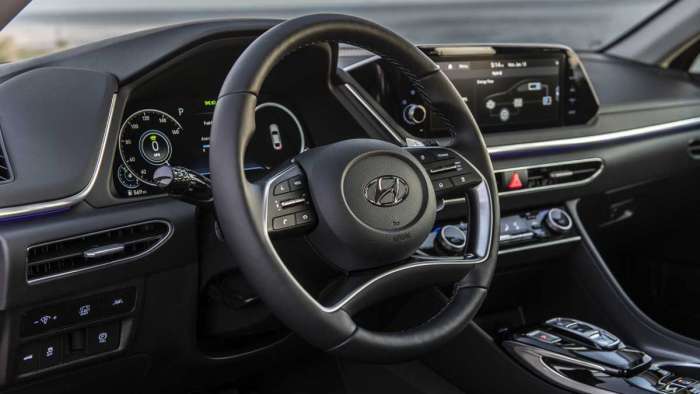 Overall, both the 2021 Kia K5 and 2020 Hyundai Sonata bring a lot to the table. In traditional Hyundai-Kia fashion, the vehicles undercut the competition while providing plenty of standard features and optional features where, when equipped, is still cheaper than well-optioned competitors. With an excellent price point and refinement, the Hyundai-Kia duo makes for a no brainer choice. I guess it comes down to the looks, and for that, I think the K5 wins me over.