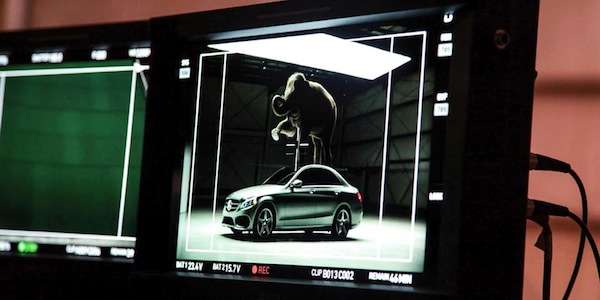 Mercedes-Benz goes to extremes and pulls out all the stops for their new 2015 C-Class TV spots. Mercedes will debut two new TV ads tomorrow called “The Choice” and “Touchpoint.” The Mercedes TV crew is using everything from fluorescent paint, black lights, special green dots, a halo light, a solid metal sled, a sub-zero freezer, and a special ML63 AMG pursuit vehicle with a roof-mounted remote camera.

Rosie is one big star

But the big star will be Rosie the elephant who will stand on the roof of the new-generation 2015 Mercedes-Benz C-class to show just how strong the new sedan really is. Mercedes says they hired Rosie to demonstrate how strong the all-new 2015 C-Class is. The new C-Class gets an all-aluminum frame that can hold up to six metric tons, which is nearly four times more than the 2015 C-Class weighs.

Rosie can stand on the roof because Mercedes engineers made extensive use of aluminum in the new design. They also use hot-formed steel parts and ultra-high-strength steels which is an unusual combination in volume production vehicles.

Mercedes also made the new C-Class safer with the new body and body shell. Mercedes says the new saloon not only meets all current national safety ratings, but also the more stringent Mercedes-Benz requirements according to "Best Real Life Safety."

The cabin is surrounded with high and ultra-high-strength sheet steel and specifically developed deformation zones with optimized force dissipation paths in the front end and rear made out of an aluminum hybrid structure. The outer skin is made virtually entirely of aluminum contributing to a stronger and safer shell.

The new body and body shell of the new 2015 C-Class will be lighter and more rigid which will improve handling, reduce cabin noise and improve crash safety. The body and body shell are 154 lbs lighter than conventional production using steel. And the new-generation C-Class will be 221 lbs lighter compared with the predecessor and it's more fuel-efficient because of it.

We’re not sure who the bigger star will be when the new C-Class ads air, Rosie or the new sedan. It looks like Rosie is ready for her close up shot. Look for the 2015 Mercedes-Benz C-Class two TV ads, “Touchpoint” and “The Choice,” when they debut for the first time on August 25. You can build your own C-Class here.