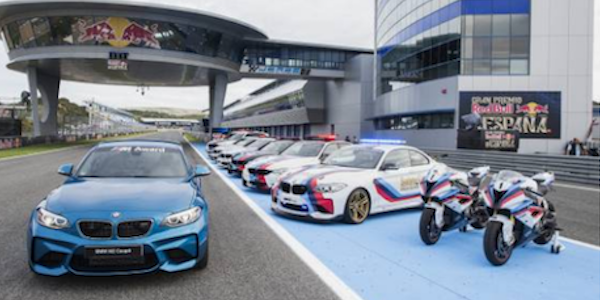 BMW unveils the winner of the BMW M Award and it’s the BMW M2 Coupe. Is anyone surprised?
Advertisement

A Long Beach Blue Metallic BMW M2 was unveiled at the Spanish Grand Prix in Jerez. The New M2 gets the nod for the coveted BMW M Award. Was there ever any doubt that it would be the newest M from BMW M GmbH?

The M2 has been on quite a ride since it was first announced last year. It just claimed the title of BBC Top Gear Magazine’s Coupe of the year in the UK earlier this month. Now it gets the M award. The M2 has created an international stir and it continues to be a popular car with performance enthusiasts. Now it will be the prize for the best qualifying MotoGP rider this season.

Pau Serracanta, Managing Director of the Commercial Department at Dorna Sports, during the presentation said, “Each season the MotoGP family eagerly awaits the moment when the winner’s car for the BMW M Award is presented in Jerez. BMW M Division surprises us every year with a truly exceptional car. With the new BMW M2 Coupe, it has presented another real highlight.”

M2 will give extra motivation

The prize gives MotoGP riders a little extra motivation. This is the 14th time the BMW M award has been presented to the top rider. MotoGP riders are awarded points relative to their positions in qualifying. Pole position gets 25 points, second place on the grid earns 20 points and third place scores 16 points, right down to one point for 15th. The rider with the most points at the end of the season will get the keys to the M2 Coupe.

Currently, Marc Marquez riding a Honda is the leader in the standings with 86 points after 4 qualifyings this season. Jorge Lorenzo on his Yamaha is second with 81 points. Marquez won the coveted award last year and drove away in a BMW M6 Convertible. He’s won the last three years in-a-row and will be the rider to beat again in 2016.

If Marquez repeats, he will get a launch-colored Long Beach Blue Metallic 2016 BMW M2 riding on black double-spoke 19-inch BMW M light alloy wheels. The interior gets sport seats in Leather “Dakota” Black with contrast stitching in blue, porous carbon interior trim, Alcantara on the door mirrors and center console, as well as numerous other exclusive features. Was there ever any doubt the new 2016 BMW M2 would be picked as the BMW M Award this year? It seems to be motivating Marc Marquez.