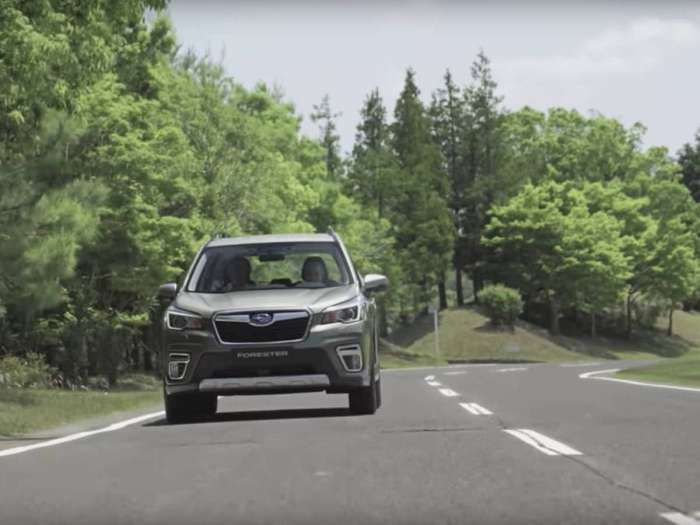 Will Consumers Feel Any Behind-The-Wheel Improvements in New Forester?

Consumers won’t see drastic changes on the outside of the new-generation 2019 Subaru Forester but will see noticeable changes in the small SUV’s driving dynamics because it will ride on the new Subaru Global Platform. We know because of the Impreza and Crosstrek models that received the new architecture first. Here’s what consumers can expect when the newly-redesigned 2019 Forester arrives this fall.

In a nutshell, the new underpinnings will reduce vibrations and produce a smoother ride quality. The body and chassis will be 70-100 percent more rigid which will translate to improved steering response, and the increased rigidity of the suspension mounting will reduce body roll by 50 percent compared to current models like we see in the new Impreza and 2018 Crosstrek.

What difference will driving enthusiasts feel?

SUVs sit up high and don’t perform well when taking curves at higher speeds or when changing directions quickly. The 2019 Forester will be designed with a lower center of gravity improving driving dynamics in the corners producing a more dynamic ride.

The 2019 Forester gets an updated suspension, improved body stiffness which will translate to better stability than the outgoing model, and a lower center of gravity for less body lean in the corners. It will also get more agile because of something called ATV.

Active Torque Vectoring (ATV), first introduced on the WRX and WRX STI performance cars, will be standard on all 2019 Forester trims. Consumers will get greater control of the small SUV and improved hazard-avoidance capabilities. The system helps reduce understeer and keeps the vehicle on the driver’s intended cornering path.

Fans are disappointed Subaru axed the Forester 2.0XT turbo for the 2019 model year and it’s not coming back. All fifth-generation Foresters get the newly-upgraded naturally-aspirated 2.5-liter boxer engine. The new powerplant comes with direct injection, higher compression, along with the active valve control system (AVCS) on the exhaust side. The new engine produces 182 hp and 176 lb-ft of torque, versus 170 hp and 174 lb-ft in the previous-generation Forester.

The all-new fifth-generation 2019 Subaru Forester will get significant improvements and consumers will get a small SUV with improved driving dynamics. Unfortunately, it arrives next year without the sporty turbocharged XT trim or a 6-speed manual gearbox model. Will Subaru launch a limited edition Forester tS for performance fans in the US?

Give us your comments below, share the article with friends and tweet it out to your followers!

Dan wrote on August 1, 2018 - 4:34am Permalink
Without a manual transmission option, a new Forester will no longer be a consideration for my household. And this from someone who owns a '17 Forester 6MT. Incredibly sad.
Brian wrote on August 8, 2018 - 5:27am Permalink
I wholeheartedly agree. It boggles my mind why they discontinued it, too. I went for over a month trying to get one through my local dealer. He would scour all of the dealerships within each neighboring state for me. Every time cars showed up in the search, they were sold before he could get my name put on it. He also told me that the ones they had received before never spent a week on the lot. I ended up special ordering one just to make sure that I would be able to get my hands on a stick shift. It was disappointing enough to have to "custom order" a car, just to get the manual transmission. Now, even that won't be an option.
Ed B wrote on August 1, 2018 - 10:13am Permalink
Thanks for the article Denis. I have no doubt that the ride mechanics will be improved. Imagine these enhancements with the addition of the new turbo found in the Ascent? One can only dream. I'm sure the new Forester will sell, but the excitement about the car line just won't be there.
Richard Joash Tan wrote on August 6, 2018 - 12:22am Permalink
But the excitement of the new Forester will be there for me.
Brian wrote on August 8, 2018 - 5:14am Permalink
"Fans are disappointed Subaru axed the Forester 2.0XT turbo for the 2019 model year and it’s not coming back." The bigger disappointment for me, is the lack of manual transmission option. The CVTs are definitely a huge improvement over other automatic transmissions, but there are still certain things that just can't be done without a clutch. Get the two transmissions stuck in a snowbank, and tell me which one is able to get out. Subaru was one of the last bastions for a manual clutch, offering it in affordable baseline vehicles. It is a sad day, indeed.