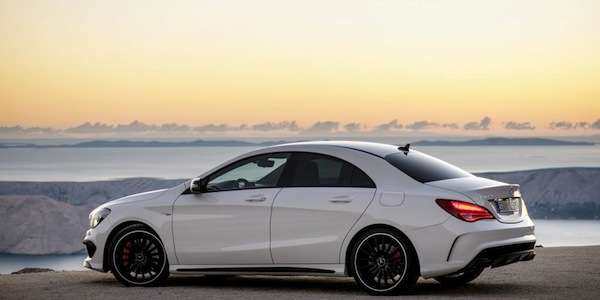 Why there’s no stopping the hot new Mercedes CLA-Class

Mercedes-Benz launched the 2014 CLA-Class with intentions of attracting new buyers to the brand. Is it working for Mercedes?
Advertisement

Mercedes-Benz is thrilled with the reception their new 2014 CLA-Class four door coupe is receiving around the globe. CLA-Class is more than a big hit around the globe, and a new generation of buyers are snatching them up as fast as the German automaker can produce them. The new sporty four door coupe was brought to the global market to help the German automaker attract a new generation of buyers to the brand. How well is their strategy working?

Mercedes most successful launch in 20 years

Mercedes tells us that since the model’s market launch in Europe in April 2013, Mercedes-Benz has handed over more than 100,000 CLA-Class four door coupes to customers all over the world. Mercedes has definitely hit the mark with the CLA-Class and younger buyers are responding in a big way. That’s exactly what Mercedes was hoping for when they designed the new luxury compact CLA. “This is our best launch in 20 years,” Steve Cannon, head of Mercedes’s U.S. sales, said last December.

Buyers have lots of choices

CLA-Class customers can choose to emphasize the sporty credentials of the CLA still further by ordering their cars with special features. Mercedes says the most popular engine version is the CLA 250 and they are getting it with the Night Package as an optional extra. Calcite White seems to be a frequent choice for exterior color for some reason. On the inside, the most popular upholstery combination is that of fabric and man-made leather in black/anthracite. And Mercedes dealers are seeing many CLA’s ordered with bi-xenon headlamps and the special safety feature Pre-Safe Brake are ordered with frequency.

The CLA-Class is especially slippery

A big part of the CLA’s appeal is its sleek new design. With a Cd value of just 0.22, the four-door coupe has what is one of the best drag coefficients of any series-production car, making it the most aerodynamic vehicle in its segment. Mercedes engineers improved the air flow over the new CLA by a number of different factors. These include a low A-pillar shoulder with adapted A-pillar geometry, aerodynamically optimized exterior mirrors, wheel trim designed for low aerodynamic drag and a specially-developed aero light-alloy wheel and serrated wheel spoilers on the front and rear wheel arches.

CLA is in a production network of two plants in Rastatt, Germany and is also built at the Mercedes-Benz plant in Kecskemet, Hungary since January 2013. The CLA lineup will expand and we’ll see the 2015 Mercedes CLA Shooting Brake shortly be leaving the production line of the Hungarian site. This will be the fifth member of the compact car family line-up from the second half of 2015.

For performance enthusiasts, Mercedes-AMG offers the hotter CLA45 AMG and it’s been available since September of last year. Mercedes says the introduction of the CLA45 AMG was instrumental in helping the Mercedes-Benz performance brand to achieve sustainable sales growth in the key US market, with growth at around 20 percent over the previous year.

The hot new 2014 Mercedes-Benz CLA-Class is on a roll and there’s no stopping the four door coupe’s momentum with a new generation of buyers. Mercedes has come up with a hot new offering that is a big hit with the millennial generation. And it’s a global success with Mercedes-Benz now handing over more than 100,000 CLA-Class four door coupes to customers all over the world.

Other 2014 Mercedes-Benz CLA-Class stories of interest.
2014 Mercedes CLA blows away BMW and its own dealers

Don Bailey wrote on September 4, 2014 - 2:09am Permalink
Great car, just not so sure about the rear view. A bit too feminine for me.