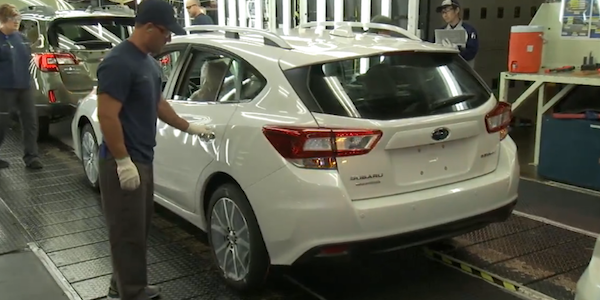 The all-new 2017 Subaru Impreza has officially cut ties with the WRX/STI now that it’s built in America. What’s next for the performance sedan?
Advertisement

When Subaru announced they would be building the all-new 2017 Impreza sedan and 5-Door compacts at the U.S. plant in Indiana, it created quite a stir. The Impreza had always been build in Gunma, Japan along with its stablemate WRX and WRX STI. But Impreza began to distance itself from its high-performance stablemate when Subaru launched the new-generation 2015 WRX/STI and removed the Impreza nameplate from the sedans.

Now, the Impreza compact has cut ties even more with the performance model and stands on its own. It’s built in the U.S. at the Lafayette, Indiana plant and it has changed things for Subaru of Indiana Automotive. The plant underwent a $1.3 billion expansion over the last 4 years as the Japanese automaker needed the room to build more vehicles. Fuji Heavy Industries, parent company of Subaru, announced production significantly increased year-on-year, due to increased production capacity as the all-new Impreza started rolling off the line in November.

Production at Subaru’s Indiana (SIA) plant is up a whopping 54 percent in December, the seventh consecutive month of year on year increase. It’s due to the new Impreza production and also the axing of the Toyota Camry production from the plant. SIA pumped out a record 27,178 vehicles from the plant in December, and many were 2017 Imprezas that will be sold in the U.S. and Canada. Some will also be shipped to Mexico.

Subaru WRX/STI is next for a remodel

The newly-refreshed 2018 Subaru WRX and WRX STI performance sedans will launch later this year and will continue to be built in Gunma, Japan. There were rumors the performance cars would also be built in America, but they weren’t true. The WRX/STI will be built on the old platform until the new-generation models come out in 2019 as 2020 models.

The Impreza compact sedan and 5-Door models break away from the WRX/STI to compete with the Honda Civic, Mazda3 and Toyota Corolla that have been the best in the compact car market. The first representation of Subaru’s all-new Global Platform arrives for the first time in the form of the all-new 2017 Impreza, and they are roomier, and the seating position and steering wheel adjustments allow room for taller drivers to be more comfortable. The car has a bigger feel inside, has a more premium attitude, and will attract a larger audience. The new-generation WRX/STI will get similar upgrades. More on Page 2.

The all-new Impreza has distanced itself from it’s stablemate WRX/STI even more now that it’s built in North America along with Outback and Legacy models. Subaru wanted the Impreza to stand on its own as a viable compact car to compete with rivals Honda, Toyota and Mazda and they succeeded. Now Subaru will need to go to work on the next-generation 2020 WRX/STI performance cars that will also ride on the new Subaru Global Platform. Lots of changes are coming for the performance sedans. WRX/STI needs to compete with very different rivals, the Ford Focus RS and Volkswagen Golf R. Stay tuned.

Contro wrote on January 31, 2017 - 1:10pm Permalink
The Impreza and WRX haven't shared a platform since 2011. The Impreza went to a new platform in 2012, the WRX stayed on the old platform till 2015 when it was entiely redesigned. No one ever thought the WRX would be built here-- nowhere near enough volume for two plants. The 2018 Crosstrek might be built in the US since it will share the same global platform as the Impreza. The 2020 WRX will be built on the global platform, but that won't make it an Impreza. The Outback, Legacy, and the new 3-row will also go on the same platform. At that point, the 5 door WRX will probably return to the US as the next gen Levorg (with a different name). The WRX GT maybe?
Scooby Fan wrote on January 31, 2017 - 11:22pm Permalink
As long as the next WRX arrives in wagon form, we don't care what it's built on. If it doesn't, we'll hang on to our old one.