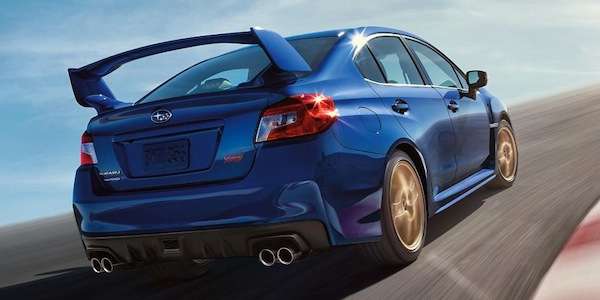 Why Rally-bred 2015 Subaru WRX STI has no competition [video]

Subaru took the all-new 2015 WRX STI out to the track at Laguna Seca and the canyon roads near the scenic California coastline. Does it have any competition?
Advertisement

The all-new 2015 Subaru WRX STI is getting ready to make its dealer launch and the new-generation STI is the best Rally-bred performance car in the world. Subaru recently took the new performance sedan to Laguna Seca to show its capabilities on the track. They also took it to the canyon roads around California’s scenic coastline for a test.

The WRX STI is Rally-bred and Laguna Seca is a great place for Subaru to demonstrate the capabilities of the new 2015 WRX STI. Laguna Seca is a paved racing track in central California used for major races such as Moto GP and the American Le Mans Series. The 2.24 mile mid-to-low-speed track features technical corners along with its infamous “Corkscrew”, a steep downhill S turn with a 49 foot difference in height.

But does the new 2015 WRX STI have any competition? The new Subaru performance sedan has a long history with the Mitsubishi Lancer EVO and it has been its chief rival since the mid 90s. But it looks like the 2015 Mitsubishi Lancer EVO X will be the last year it will be produced. With the Evolution seeing its last hurrah, the new 2015 STI stands alone in the rally-bred field.

There won’t be any real competition for the new 2015 WRX STI with the Mitsubishi Lancer EVO going away. The new-generation WRX STI comes with a powerful 2.5-liter boxer turbo engine, Subaru’s Symmetrical All-Wheel Drive and race-tuned suspension. Sure there are more powerful performance vehicles on the market, but who can challenge the WRX STI in the corners, tarmac and race environment?

This is where the WRX STI thrives and Subaru fans who drive the STI know what this car will do in the corners. I recently talked to a 2013 STI owner who took his Black 5-door hatch out for 10-mile run on a canyon road near Glenwood Springs, Colorado. He took the performance car out for a 95 mph run on the two-lane mountain road, and the only problem was the rider who nearly lost his lunch during the thrilling ride. Because the mountain road is not patrolled by the local law enforcement, it's the ideal spot for the STI.

Mitsubishi fans also know the Lancer EVO is probably its only equal. In stock form, without any modifications, these are the only two all-wheel-drive performance cars who can take on an environment that has extremes of wet, dry and loose dirt and the driver has complete confidence in the cars abilities.

The new generation 2015 Subaru WRX STI is engineered to perform. It’s only equal has been the rally-bred Mitsubishi Lancer EVO. With the 2015 EVO being the last model produced, WRX STI stands alone now and really doesn’t have any competition.

Other 2015 WRX STI and Mitsubishi Lancer EVO stories of interest.
Will Mitsubishi make a big mistake and pull the plug on Lancer EVO?
2015 WRX STI has deep connection to the Nurburgring 24H race car

Watch the 2015 WRX and STI on a thrill ride in this all-new video from the scenic California coastline to the twisting track. Another video shows the WRX STI as it navigates through an autocross track made entirely of moving drone quadcopters.

Al Juraj wrote on April 9, 2014 - 9:59pm Permalink
The Evo is what defines Mitsubishi. Super sedans are more popular than ever, and the ultimate Lancer certainly fits the bill for those who can't afford a BMW M car with four doors. They should keep this car alive. In fact, this should be the last car to be axed from the lineup. The Evo X has been miles better than the previous WRX STi. Subaru now has a new one, and for sure the XI will be a step ahead should it go ahead. Hybrids have not become as renowned as expected, due to relatively high pricing and artificial driving feel. It will be a big risk for MMC to go the way of the Prius. Toyota is all over the gasoline-electric hype, and no other manufacturer has come close in technology. Mitsu should certainly stick to 4WD sports cars.