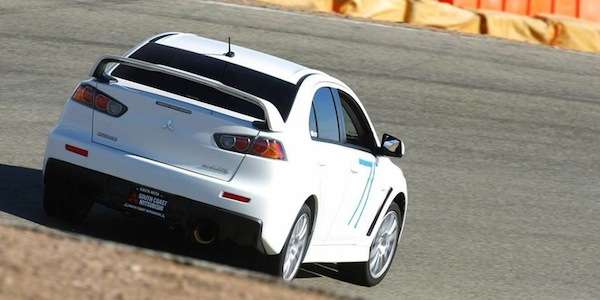 The 2015 Mitsubishi Lancer Evolution has just started production in Japan and will make its dealer launch here in the U.S. soon. Will fans buy a PHEV EVO?
Advertisement

Mitsubishi is getting ready to launch the 2015 Lancer Evolution here in the U.S. and it will sell well. MItsubishi Motors North America released sales figures of the Lancer Evolution and this was the best January through June sales total since 2008 for the EVO. Lancer Evolution sales totaled 1,569 for June and are up 14.5 percent year-to-date. There is a huge fan base of EVO fans who still want the performance car.

Mitsubishi is seeing this demand for the EVO X but is still going to axe the popular model after the 2015 model year here in the U.S. This will be the last generation of the performance car with a gas-only powertrain. It looks like Mitsubishi Motors Corporation (MMC) is designing a new Lancer Evolution successor that will have a high-performance hybrid powerplant.

What is Mitsubishi up to?

Mitsubishi Outlander PHEV will run in the Asia Cross Country Rally from Thailand to Cambodia. This is the second straight year Mitsubishi will run an Outlander PHEV in the race. MMC engineers will provide technical support for the Two & Four Motor Sports rally team, headed by Kenji Ishida for the plug-in hybrid four-wheel drive SUV for the duration of the rally. Mitsubishi Motors will use the data gathered from this race to provide technical support for future PHEV performance vehicle development.

Mitsubishi entered two MiEV Evolution III all-electric racecars in the Electric Modified Division at the Pikes Peak International Hill Climb and achieved a one-two victory. MMC wants to show how an all-electric vehicle can perform under extreme conditions and they succeeded in a big way. MMC engineers were on hand to learn how this technology holds up in extreme race conditions. We are likely looking at the technology MMC will use in the 2015 Mitsubishi Lancer Evolution successor.

The 2015 Mitsubishi Lancer Evolution is the last of its kind, but Mitsubishi isn’t done with Rally racing yet and will use the valuable information the MMC engineers gather from the new Outlander PHEV and the MiEV Evolution III all-electric racecars for the next-generation Lancer Evolution development. Stay tuned.