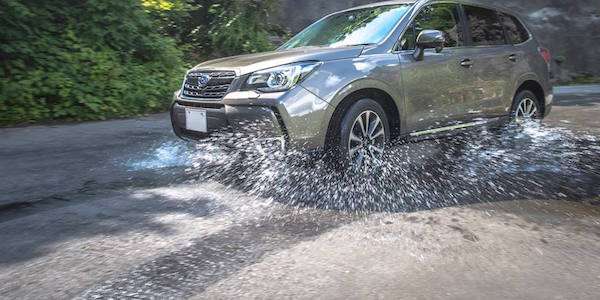 What Makes Subaru Forester the Longest Running Top Safety Pick in its Class?

Subaru Forester extends its record as the longest running Top Safety Pick in the small SUV class with an 11th win (2007-2017). How does Forester do it?
Advertisement

In addition to earning the TSP+ designation, Subaru vehicles continue to build on their impressive safety records once again setting industry benchmarks. The 2017 Subaru Forester just picked up its 11th straight Top Safety Pick award. The Subaru Forester extended its title as the longest running winner in the small SUV category. How does the Forester keep doing it?

EyeSight uses stereo camera technology to monitor the road and traffic ahead for potential hazards. It could prevent you from getting into an accident. With its driver-assist technology, it's optical cameras can recognize a potential situation and stop the car before a crash occurs. It can also benefit consumers by saving money with cheaper insurance premiums.

Last year, Subaru released data from a survey of traffic accidents involving Subaru vehicles in Japan from 2010 to 2014. The data revealed a 61 percent reduction in crashes for vehicles equipped with EyeSight, compared to those without. No other automaker can make these claims.

“Safety continues to be one of Subaru’s core values,” said Shiro Ohta, chairman, president and CEO of Subaru Canada, “We will continue to demonstrate our commitment to safety as we design and develop core technologies such as the Subaru Global Platform, to meet the safety standards of the future.”

The 2017 Subaru Forester is the longest running Top Safety Pick winner in the small SUV category. Subaru does it by paying attention to one of its core values. It’s in the brands DNA.