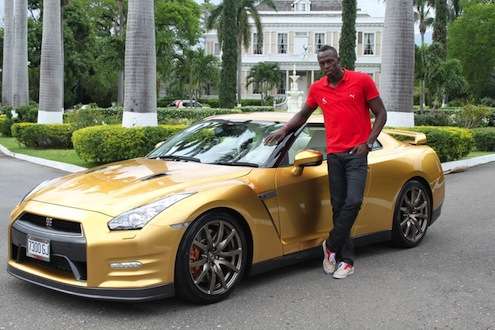 The "fastest man in the world”"Usain Bolt has won gold again and this time he gets to drive the new 2014 Nissan "Bolt Gold" GT-R medal home.
Advertisement

Nissan has a fascination with speed both on the race track and on the track and field. Olympic gold medalist Usain Bolt has been a spokesperson for the 2014 Nissan GT-R, and the Japanese automaker wanted to give a one-off "Bolt Gold" 2014 Nissan GT-R in appreciation for his contributions as a Nissan brand ambassador. The unique GT-R is bathed in exclusive gold paint and goes right along with Usain’s gold medals he received in the Olympics. What other goodies did Nissan give the "Bolt Gold" 2014 Nissan GT-R?

Bolt has been promoting the company's brand awareness in association with the Nissan Global Brand Campaign, which kicked off in April 2012 and has been running faster for Nissan than he has on the track. Nissan is capitalizing on Bolt’s success in the Olympics and brought him to Japan last October where he drove a Nissan GT-R at Nissan's GranDrive testing track and Yokohama headquarters. Bolt likes speed on the running track and he liked it even more riding in the GT-R at the Nissan test track.

The presentation of the new "Bolt Gold" 2014 Nissan GT-R was held in Bolt's home country of Jamaica. The special Gold GT-R that Nissan presented to Bolt is based on the 2014 model year Nissan GT-R. It has been customized to suit Bolt's driving style, based on the data Nissan engineers recorded during his test drive of the GT-R line-up when he visited company headquarters.

During his time test driving the new 2014 GT-R, Bolt said, “the last few laps were really fast and scary, he was drifting a few times. But it was a lot of fun. I like speed!, I really enjoy driving fast.” Bolt was able to test and also drive two different GT-R’s, “a sports one and a more luxury one,” said Bolt.

Bolt selected everything on the custom car

It must have been love at first sight for Bolt when the one-of-a-kind "Bolt Gold" GT-R was unveiled for him in his home country of Jamaica. The uniquely gold-painted Nissan GT-R gets a number of custom features designed just for Bolt and to his liking. It comes with a flamboyant white interior to match his personality, BOSE audio system and 10-spoke RAYS aluminum-alloy forged wheels.

The specially fitted, hyper-titanium color-coated wheels, exclusive "Spec Bolt" emblem on the exterior, visual specs of the car, exterior color, interior color and wheels, were all selected by Bolt himself. Bolt was presented the car yesterday at Bolt's home training facility in Jamaica that overlooks the mountains in his home country. We wonder if he will just display it along with all his gold medals or if he will actually drive it?

Jose Roman, vice president of Nissan Latin America and the Caribbean, was on hand to officially hand over the keys to the Gold GT-R to Bolt. It’s just another perk that Bolt gets for being the “fastest man in the world” and being the world’s ambassador for the 2014 Nissan GT-R.