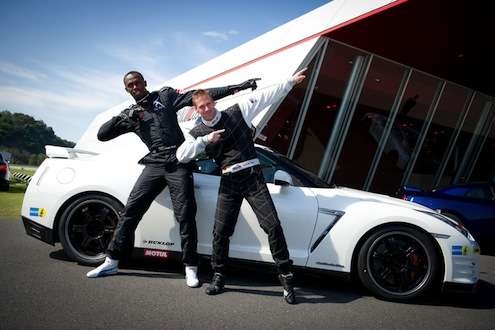 Usain Bolt is the fastest man in the world and brought his recording breaking speed to Nissan's GranDrive testing track in the Nissan GT-R. [Video]
Advertisement

Usain Bolt had a chance of a lifetime yesterday when he rode in the Nissan GT-R with Super GT driver Michael Krumm at Nissan's GranDrive testing track and Yokohama headquarters. Jamaica's multiple gold medal winner made the trip to Nissan's Global Headquarters this week to promote the auction of an exclusive gold-painted GT-R that will benefit the Usain Bolt Foundation. The main purpose of the foundation is to help create educational and cultural opportunities for children in Bolt’s home country of Jamaica.

Since June 1st, advertisements for Nissan featuring Bolt have appeared at major world airports as part of the company's "WHAT IF_" campaign. Nissan has named Bolt their “Director of Excitement” and the world’s fastest man certainly brings excitement wherever he goes. Nissan is capitalizing on Bolt’s success in the Olympics and brought him to Japan to create media coverage for their new Nissan GT-R. Bolt rode in the fast GT-R with Super GT driver Michael Krumm and it was a thrill for the Olympic record holder.

Bolt likes speed on the running track and he liked it even more riding in the GT-R at the Nissan test track. Bolt said, “the last few laps were really fast and scary, he was drifting a few times. But it was a lot of fun. I like speed!, I really enjoy driving fast.” Bolt was able to test and also drive two different GT-R’s, “a sports one and a more luxury one,” said Bolt.

After taking the GT-R’s aroung the Nissan test track, the world's fastest man went to the company's headquarters to meet with Chief Operating Officer Toshiyuki Shiga. He also spoke with the Global Media Center's Coco Masters about his future plans and the Usain Bolt Foundation. Bolt has taken his success and used it in a positive way to benefit the cultural and educational development of children.

Bolt was in Japan to also promote the auction of the Bolt Gold GT-R to raise funds for the kids. Bolt told Masters in the interview, “We're going to do different things. Mainly, we start from the school year to develop younger kids, to give them computers, more learning books and stuff like that. My motto is that the kids are the future. That's why I base my foundation on the fact to develop the kids of Jamaica and hopefully around the world soon.”

It's good to see Usain Bolt using his success in a way that benefits kids to create opportunities for them through education and sports. Look for Bolt’s Gold Nissan GT-R to be auctioned off on eBay.

Watch Bolt take the Nissan GT-R around the Nissan test track in Japan.