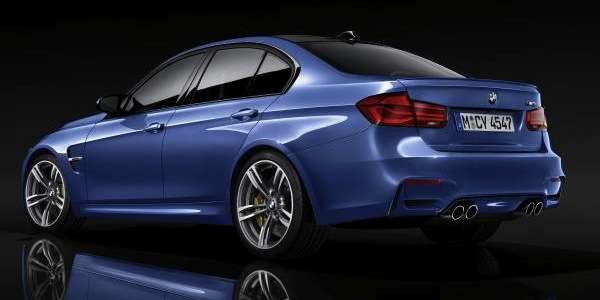 BMW will charge more for the new 2016 M3 and 2016 M4 here in the U.S. What will performance fans get for the increase?
Advertisement

BMW will increase the price of the 2016 M3 sedan and 2016 M4 coupe in the U.S. The Bavarian automaker will charge about two percent more than the 2015 model performance cars. What will buyers get for the price increase?

The 2016 M3/M4 will now come standard with the Harman Kardon premium surround audio system ($875 before), along with satellite radio and keyless entry. The M4 Convertible also gets a standard center pass-through in the rear seats for hauling longer items.

For 2016, M3 also comes with newly designed full-LED rear tail lights and some new chrome highlights for the interior. The biggest benefit will be the new LED tail lamps are extremely efficient saving power and weight in the new M3. They will also be instant-on, unlike incandescent bulbs that need to “warm up” creating additional heat and resistance. The new M3’s LEDs are exceptionally thin providing a packaging benefit and they are lighter and use less electrical power.

BMW will now offer their new generation Navigation system Professional with LTE on the 2016 M3. BMW says the system will have quicker start-up, faster route calculation and more realistic 3D visualization in cities. The LTE technology when fitted with the Navigation System enhances USB, Bluetooth and smartphone integration. Those living in rural areas should see improved network coverage and data transmission speeds according to the German automaker.

BMW says they will discontinue Sakhir Orange Metallic paint from its available options on the 2016 M3 and 2016 M4 and will only make it available through a custom order. BMW M3/M4 performance fans in the U.S. will pay more, but will get new standard features and technology.